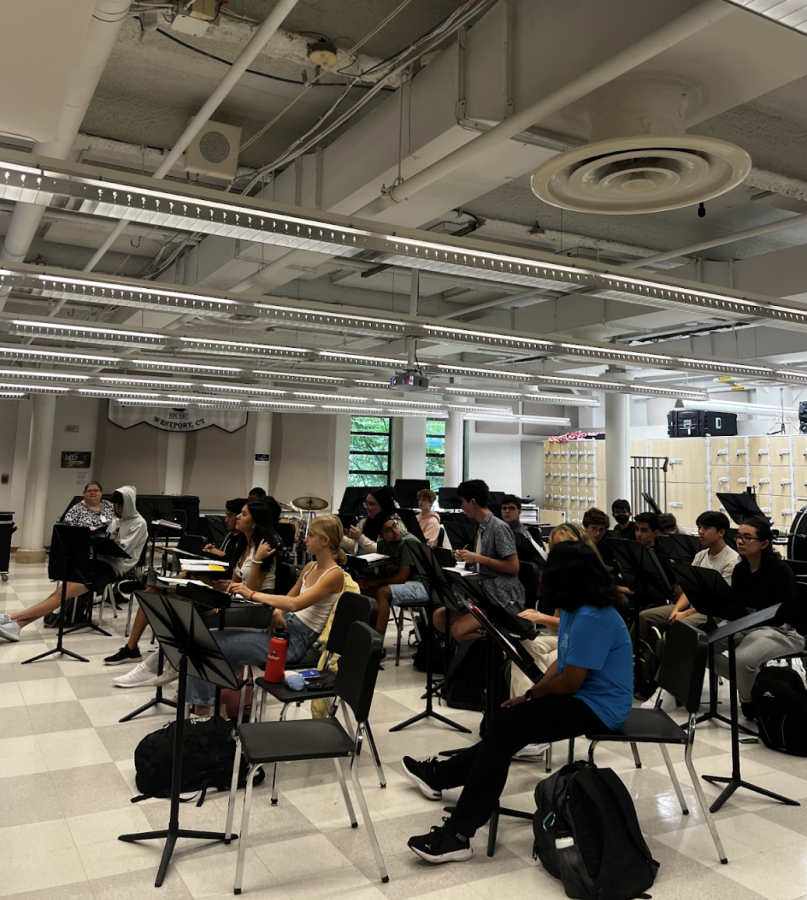 Students in AP Music Theory during period 4, featured in the middle of a busy day with Mr. Giampietro and Ms. Mascaro. Photograph by Audrey Curtis

Staples High School is known for its award winning music programs: the band, the orchestra and  the chorus. But what course displays it all? AP Music Theory.

The AP Music Theory course provides students with a variety of unique musical skills and knowledge, Due to larger interest and enrollment, this year the course will be co-taught by band director Philip Giampietro and symphonic orchestra co-director Carrie Mascaro.

Giampietro has been teaching this course since he joined Staples in 2019. Having another teacher gives each student more individual attention.

“Ms Mascaro is going to be teaching a lot of aural stuff, the idea of ‘can you hear what you see.’ (..) There’s also the written test part where Mr. Giampietro is working the students mostly on that side,” Stephen Zimmerman, coordinator for music and visual arts, said.

The AP Music Theory course now has the ability to cover a large spectrum of music, which students hope they are able to do.

“There are hundreds of other cultures and time periods which approach music in very different ways,” Jeffrey Pogue ’23 said.  “I think a diversion into some of these areas would be very interesting.”

The AP exam also has an element of uniqueness in how it tests knowledge. While usually AP exams include a combination of timed writing and multiple choice, the Music Theory test differs.

This class requires interested and easy learning students, who are looking for a challenge.

“I didn’t expect to do as much singing in it. I have been enjoying it though, and I feel like it is making me a more well rounded musician,” Caitlyn Schwartz ’24 said.

The complexity of this class comes down to the variety of skills students are learning, which challenges them on a deeper level than a typical AP course. Students are now beginning to discover the underground aspect of music, where they are expected to use their own creativity to conquer distinctive tasks.

“It’s kind of like opening up the hood of a car and actually trying to figure out what everything does under there,” Giampietro said, “instead of just getting behind the driver’s seat and driving.”