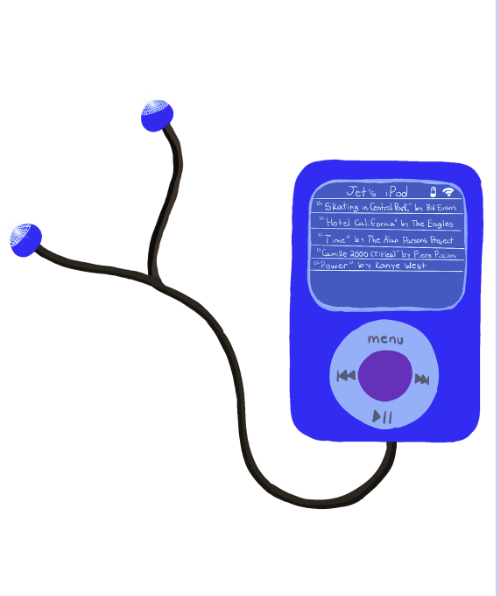 Jet Tober '23 developed a passion for music at the age of 3, and has since delved into songwriting.

When listening to the opening lines of Kanye West’s song “Touch The Sky,” an immediate, electrifying response bubbles in Jet Tober ’23—in only a few seconds, his head begins to bob, his eyes close in concentration, and he quietly hums along to the tune. This passion for music began over 13 years ago—when Tober was 3 years old—and today, he pursues this interest through participating in various ensembles as well as composing and producing his own music.

“When I was 3 years old, I went to a hotel and I sat down at a piano in the hotel lobby,” Tober said. “I was just clinking away at the keys and I played two notes that sounded good. I wanted to learn how to do that again.”

Tober is a member of the Staples Jazz Band (piano), the Symphonic Orchestra (cello) and Orphenians. He began studying piano privately at age five, picked up the cello in fourth grade and has sung for as long as he can remember. Immersed in music for all of his life, Tober began to develop an interest in music composition and production—separate from performing in an ensemble or as a soloist—when he was in third grade.

“I would hear melodies in my head, and I would want to be able to play them,” Tober said. “I wanted to translate them into something I could experience and other people could experience.”

In pursuit of this goal, Tober decided to familiarize himself with a variety of genres and composers, such as Leonard Bernstein, Mozart and jazz music. He experimented with GarageBand before purchasing Logic, a more advanced production software.

Initially overwhelmed by Logic’s features, Tober spent time watching tutorials and reading the help guide to gain more understanding of its functions. As a beginner, he started by making simple beats, and upon improving his abilities, Tober began to imitate other artists’ songs. Eventually, through practice and research, Tober started to compose his own pieces, including classical, hip hop, jazz fusion, rock and rap. After creating a composition, he enjoys sharing them with fellow classmates.

“At various points throughout my schooling career, when there has been a project to create something, I normally default to a song, because I like the production aspect of it—it just makes it fun for me,” Tober said. “Honestly, songs are catchy and they help you remember concepts. A lot of [composing/producing] is for personal enjoyment, and for the enjoyment of friends and family.”

Zach Brody ’23 recalls listening to one of Tober’s songs during class this year.

“I heard his song ‘Unit P’ in my WTP (We the People) class,” Brody said. “It was actually insane—like so good. It was a rendition of ‘pushing P’[by Gunna and Future] with his WTP unit as the theme.”

Tober feels that the majority of his inspiration for composition and production lies in his love for jazz, and he often incorporates jazz-like features in his pieces.

“[Jazz] has this element of surprise that you can throw in by painting [the music] with different colored notes, like when you’re improvising or just playing unique chord progressions in general,” Tober said. “For me, it’s the most expressive genre […] You’re using what you’ve learned and you’re applying it, but it’s not pre-planned—you’re feeling in the moment and [creating] what sounds good to you.”

Band and jazz director Philip Giampietro acknowledged Tober’s role as a pianist in the Jazz Band.

“[Tober] plays improvised solos on some songs,” Giampietro said, “where he is performing new melodies on the spot.”

Tober’s involvement in other Staples ensembles has helped him better understand and appreciate the role of different instruments/elements.

Ultimately, Tober believes in the transformative power of music and knows that it will always be a part of his life, even if he doesn’t know what his musical path holds yet.

“By manipulating air molecules [while playing an instrument], you can change people’s emotions—you can make them euphoric, relaxed or sad […] That’s like magic,” Tober said. “I just enjoy [music] too much to not always have it be part of my life. To what extent I’ll proceed, I’m honestly not sure. But, I’ll always enjoy it and it will always be something that I have, whenever, wherever.”