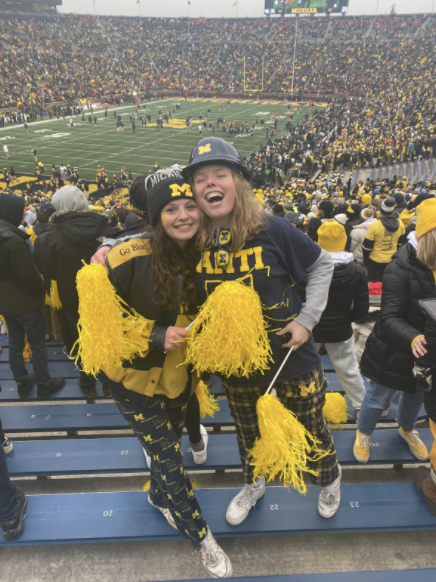 Goldman (left) dressed up for the Michigan Vs. Ohio State rivalry football game.

An ordinary winter day in January 2021 quickly shifted to be life-changing for past Inklings paper managing editor Lys Goldman ’21. All of the hard work and preparation spent throughout high school became worth it at one special moment. Goldman applied early action to the University of Michigan, her dream school, and was accepted!

Goldman involved herself in any way she could in the Staples community. She was a part of many clubs, held leadership positions, took advanced classes and was captain of the girls’ soccer team. She is constantly taking chances and seeking out new opportunities, despite challenges and uncertainty, setting her apart as driven, fierce, impactful and incredibly hardworking.

For Goldman, writing has always been a strength and preferred subject. She took Intro to Journalism during freshman year and decided to further pursue journalism by joining Inklings.

“I decided to just go for it,” Goldman said. “I thought it would be a good opportunity for me to just be able to write more and gain more skills in my writing and it definitely turned into more than I expected.”

“It was with paper sports that I realized I actually really enjoyed more than just writing. The whole editing and the whole layout process was just amazing and I realized how much I loved it,” Goldman said. “So that’s when I started to get a lot more into Inklings and I was really really glad I decided to take Advanced Journalism.”

While being an active member of Inklings, Goldman was also a dedicated player to the girls’ soccer team at Staples. During senior year, one of the most stressful years of high school, she was chosen as a captain for her team and also held a top position for Inklings as a paper managing editor.

“So it was definitely a lot, especially during soccer season, and was a bit overwhelming at times,” Goldman said. “But, I am so so glad I was a paper managing editor. I absolutely loved it and can’t recommend it enough.”

The level of intense dedication to stay involved, committed and to be a leader did not go unnoticed. Hailey Johnson ’24, a freshman on the girls’ soccer team at the time Goldman was a senior, became friendly with her due to Goldman’s extremely gregarious personality, good sportsmanship and words of encouragement.

“It is always scary trying out for a sports team, especially when you’re a freshman,” Johnson said. “However, I vividly remember Lys always cheering everyone on, having a good attitude and checking in on how we were doing. […] I truly think that she majorly influenced people’s mindset in a good way. She made people want to be there, reminding them what and why they play.”

Keira Best ’24, another member of the soccer team last year, also noticed the positive impact Goldman had and took notice towards her managing skills.

“She always brought happiness to me, the rest of the freshman team and the other teams, but I noticed something more,” Best said. “I’ve always wanted to go to a school with similar academic and physical levels and seeing Lys managing her schedule with sports and academics and being successful makes me think I can do it too.”

Goldman agrees with Best on how perfect the dynamics of Michigan are for her.

“I love going to the sports games and love that it’s a big school. I love the location and love the distance from home. It was the perfect choice for me in regards to academics and social life and everything,” Goldman said. “I don’t think I could have chosen a better school for me.”

Due to her love for Inklings, Goldman realized she wanted to continue with journalism in her future. When she entered her freshman year at Michigan, she became involved in journalism in many ways, one being an internship for a podcast called the “Name, Image, and Likeness Report.”

Additionally, Goldman is the graphics and branding manager for the Michigan Sport Business Conference, an organization that plans events for the school which happen annually.

“There have been so many times where my experience with design from Inklings in that role and just like the skills that I’ve gained from an organization like Inklings,” Goldman said. “Every extracurricular that I’ve been doing has involved skills that I learned from Inklings all to a certain extent.”

Inspired by her involvement as a sports writer and editor for Inklings, Goldman’s passion has evolved as she has hopes to join The Michigan Daily, University of Michigan’s Newspaper, as a sports writer. Overall, while partaking in many extracurriculars at Michigan, she noticed and reflected on how impactful Inklings has been to her current college life.

“There are so many opportunities to get involved with, and even though I was more on the paper side, I was able to get involved in the business side. I was able to write, edit, oversee things, and layout pages,” Goldman said. “And I’m so glad that I did all of it. Inklings provides so many opportunities to learn and grow in so many different aspects of journalism and business and marketing. So I just think we need to take advantage of that and appreciate all it can do for us.”