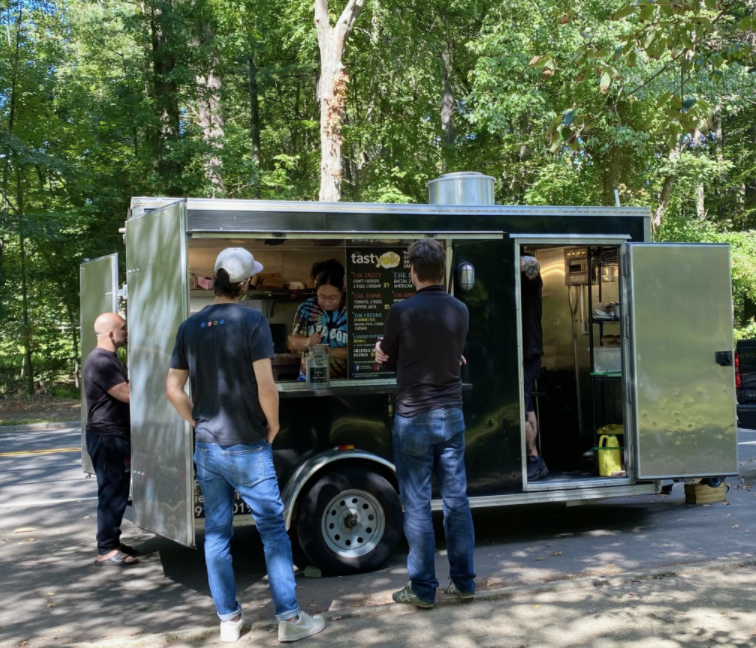 Customers order by the window of The Tasty Yolk food truck in Fairfield while the staff cooks and prepares everything from brussel sprouts to bacon and egg breakfast sandwiches.

Food trucks have become increasingly popular in Connecticut, offering an efficient and tasty meal. Tacos, burgers and lobster dishes have become available within minutes throughout Westport and neighboring areas. However, the town was lacking one major thing: a breakfast food truck.

The Tasty Yolk opened in 2016 after business partners Eric Felitto and Mike Bertanza realized that there was an opportunity to capitalize on the Sacred Heart community with a new food innovation.

“I lived a couple of blocks away from the school at that time and was not impressed by the choices,” Bertanza said. “There was an opportunity in the market that no one else was capturing.”

From breakfast sandwiches to scrambled eggs, The Tasty Yolk efficiently serves delicious food that can be picked up easily. There are currently four Tasty Yolk food trucks being utilized in Fairfield County: one in Fairfield, one in Southport, one in Bridgeport and one for private events.

The food trucks are extremely popular to rent for private events and have been utilized over 100 times this summer. They have also been spotted in the Bedford Middle School parking lots before school hours and were intriguing to students.

“I often saw the trucks in the morning during my walk from Wakeman,” Jack Murphy ’22 said. “It looked like a really easy option for teachers to grab breakfast before work.”

Due to the easy mobility, low costs, increase in advertising and overall sense of identity, The Tasty Yolk trucks have seen an increasing amount of success. They have received a number of awards for their food, including MSN’s “America’s 100 Best Food Trucks” and 2017 Readers’ Choice Best Food Truck category winner.

“What makes Tasty Yolk different from other breakfast restaurants?” Bertanza asked. “We are the best.”