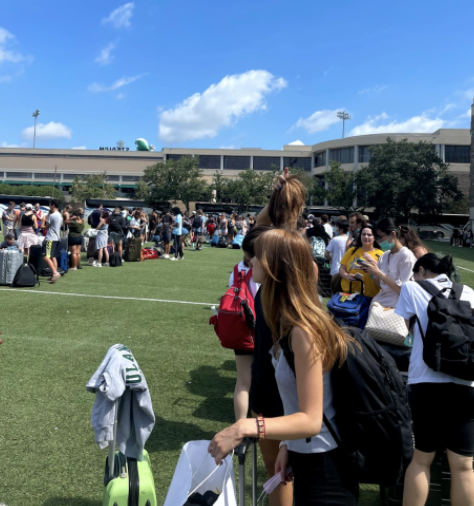 Line for students to evacuate from Tulane’s campus to Houston, Texas. Photo contributed by Maizy Boosin ’21.

Thousands of students at Tulane University were impacted by hurricane Ida. Numerous Staples alumni who attend the New Orleans based university were pushed out of their dorms and back to Westport.

According to Tulane Today, “2,250 students, including on-campus, off-campus, and graduate and professional students who sheltered in place during Hurricane Ida were relocated.”

Tulane freshman Maizy Boosin ’21 believes the school did the best job they could with the little information they had. She was pushed out of her dorm due to a 120 foot crane outside her building that posed a threat to residents. She packed up her newly organized belongings and spent 36 hours inside the student center anxiously awaiting for more information. From there, Boosin took a bus to Houston, Texas where she could get to the airport and fly back to Westport.

Boosin is currently attending online classes from her home, yet classes still remain on central time.

“I’m not a fan of online school. Everyone has their cameras off in 200+ student lectures, and the time difference is a struggle,” Boosin said.

Being so new to college and the community, one would think making friends off campus would be a struggle, but Boosin shares that she believed the hurricane actually brought her closer to students.

“Coming home was good socially, you kind of have a chance to text and meet certain people,” Boosin said.

While she does believe the hurricane brought her closer to some people, she recognizes it isn’t the same college experience she would be getting on campus. Boosin plans on returning to campus on Sept. 24 and is itching to get back to New Orleans.