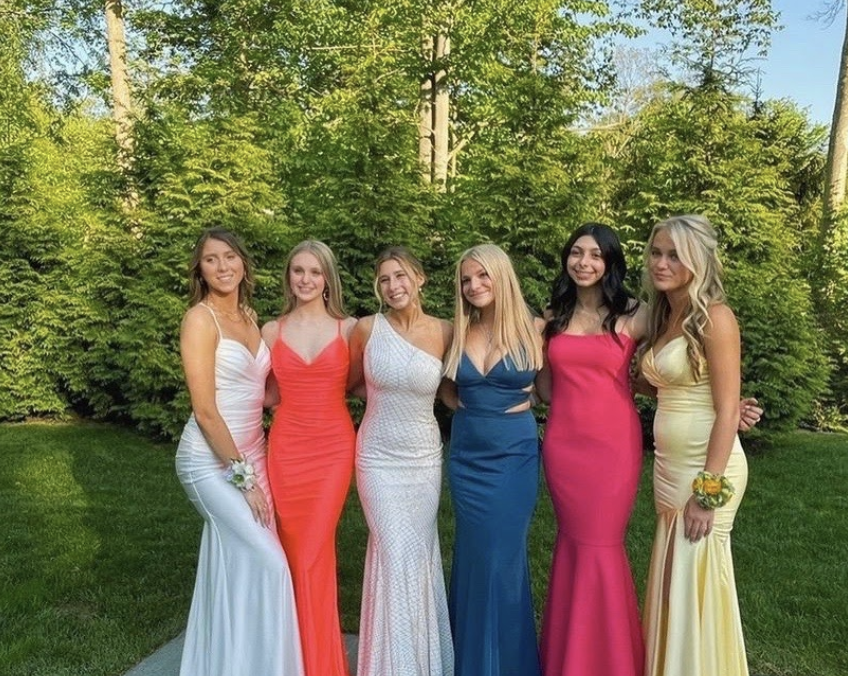 2021 senior prom continues on despite COVID-19.

Seniors put on their fanciest attire and took to the Staples High School courtyard for their first and final high school prom on May 14 and 15. After the cancellation of last year’s junior prom due to the pandemic, students were excited to undergo the prom experience they had always longed for.

It was important that these two nights full of dancing, socializing and games would be extremely memorable, as it concluded an unusual year for seniors. Prom allowed them to have one last high school souvenir. Several efforts went into making this prom as “normal” as it possibly could be.

“I do think this was a good way to end an unideal and crazy senior year because it was a normal senior experience that we got to have,” Ellie Bass ’21 said.

DJ’s blasting music from pop to throwbacks, as well as a variety of activities, were incorporated into the prom to ensure that it would be a fun and unforgettable evening. Safety was the top priority for prom planners, and COVID-19 precautions had to be maintained to allow the prom to proceed.

“We had to wear masks to the prom, and there were two separate days that people could go,” Bass said. “But I don’t think COVID made an actual big change to the prom experience.”

Never before had prom been split into two separate nights, but due to the attempt of social distancing, and limitations on the amount of people allowed at the venue at once, this was a necessary safeguard. Both Friday and Saturday night looked identical, despite the fact that the majority of the seniors attended the prom on Saturday night, leaving the Friday night event relaxed and lowkey.

“I don’t know what a normal prom really looks like, but I went on Friday so it was a lot less crowded than usual,” Zander Toglia ’21 said. “There were less people and less energy than I expected, but I still had a good overall experience.”

Saturday was the more popular day to attend.
“My friends and I decided that Saturday would be a better day because Friday was our last day of school and we didn’t want to be missing out if we had to get ready for prom,” Bass said.

Although Staples made a large effort to make prom night conventional, many seniors felt worried about this protocol and decided to take matters into their own hands.

Moskowitz shares that this DIY prom approach was accomplished by going to one of her friends’ houses, dressing up and getting a DJ. This allowed for them to get a similar prom experience, while still being with all of their friends.

“We tried to closely replicate what the school prom would have been like,” Moskowitz said.

As unconventional as the year was for seniors, everyone was happy to have one last experience with their classmates.

“I was really happy to see people I won’t be seeing in a while, or ever again,” Max Shutze ’21 said. “It was nice to see everyone enjoying themselves, as it was the last time we would all be together.”