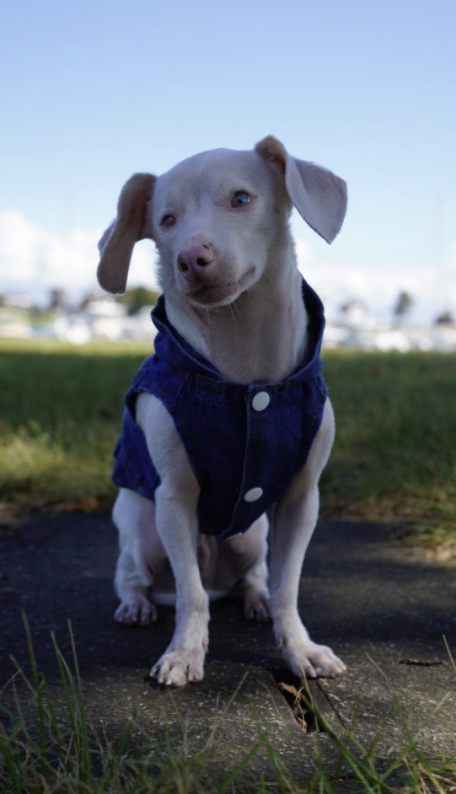 Piglet the deaf, blind, pink puppy poses outside Longshore Club Park. His book is set to be published on Aug. 3, 2021.

When Melissa Shapiro, DVM decided to adopt Piglet, a deaf and blind puppy, she made a promise to him: he will have a productive, meaningful life. Four years later, the dachshund-Chihuahua mix has made tours around the country, acting as a model for positivity and resilience. In hopes of continuing her promise, Shapiro is now retelling Piglet’s story- the initial challenges to the heartfelt triumphs- in her upcoming memoir, “PIGLET: The Unexpected Story of a Deaf, Blind Pink Puppy and His Family.” The book is expected to be released on Aug. 3, 2021.

The duo’s journey started after Shaprio accepted an offer from the Colbert Veterinary Rescue Services to foster the puppy. Despite Shapiro’s previous experience with special needs animals, she quickly realized that Piglet was easily the most anxious and challenging puppy she had ever fostered.

“I networked with people around the country, so I knew a lot about deaf, blind dogs because I had seen what they were doing,” Shapiro said, “[but] Piglet came in, screaming like a raving lunatic.”

However, Piglet’s screaming was eventually soothed with Shapiro and her husband Warren Shapiro’s patience; they eased Piglet into a daily routine, and implemented tap signals to comfort him.

“I picked spots to touch him and gave him a little tap which we connected the tap with the trick or behavior,” Shapiro said. “All of this worked really well with connecting with him because it was something he was doing with us and enjoying.”

After around two months of establishing this routine, Shapiro took her first steps in fulfilling her promise. Initially, Shapiro had plans for Piglet to be an advocate for animal welfare issues, but a Facebook comment from a Massachusetts teacher in 2017, prompted her to expand Piglet’s advocacy even further.

The phrase, coined Piglet Mindset, encouraged the students to face challenges with a positive attitude, try their best, maintain a growth mindset and make use of the skills they have.

With the growth mindset lesson in mind, Shapiro began crafting presentations as part of an educational program, which is now used by teachers around the world to inspire positivity. The creation of her program has given the pair the opportunity to meet and engage with students.

“It certainly is especially rewarding and emotional to meet people with disabilities who relate the Piglet with their own experience,” Shapiro said. “And I’m really happy to talk to the students without disabilities, also, who are learning and hopefully applying some of what I’m showing about Piglet to have empathy and acceptance towards others, no matter what their differences are.”

As Shapiro’s story with Piglet embarks on a new chapter, she has combined their experiences into a memoir. While the book focuses on Piglet’s life and message, there are also lessons about goal setting, dog adoption and animal welfare intertwined throughout the book.

“We want people to enjoy the book and we think it’s a nice story that people will enjoy. There’s humor, there’s emotion and there are some very moving parts that I think people will relate to,” Shapiro said.

With several different elements and themes in play, Shapiro hopes that readers will be inspired by her work.

“Whether it’s dog training, or a vet-related topic or subject or even just looking at their neighbor and having more empathy towards them,” Shapiro said, “we really really hope people come away with something they can apply to their own lives.”