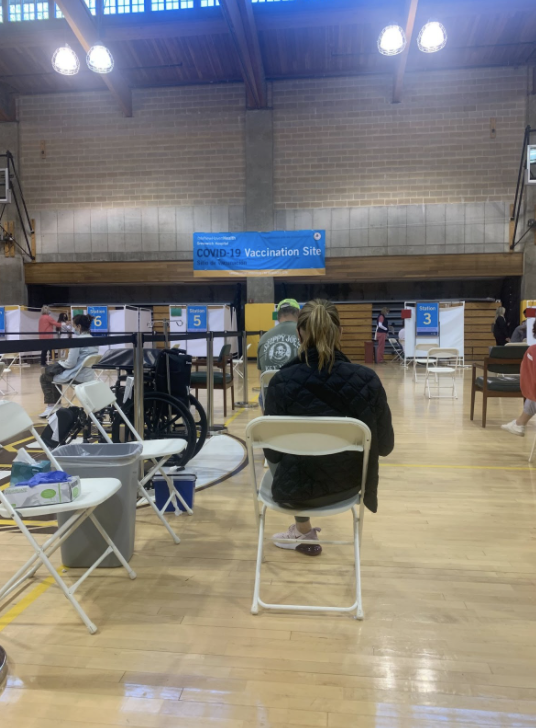 A group of Connecticut residents wait in a socially distant line for their vaccine at Brunswick School in Greenwich.

On April 1 at midnight, half of the Staples student body scrambled to book their COVID vaccine appointment, eager to be granted “immunity” to the virus. This quick rollout fostered hope within the 16+ Staples High School community. However, this extra protection from the coronavirus came at a small cost — many recipients’ arms were weak after the first shot, while some have been feeling ill for up to a week after their second dose.

After Sammy Webster ’21 was injected with her first shot, she didn’t experience many side effects, contrary to her preconceived notion about the repercussions. Even more intriguing, her entire family barely had a reaction to the second shot.

“I definitely think that my reaction was mild, and everyone else in my family was the same. I would not even really say that we had reactions aside from slight arm pain where the shot was given,” Webster said. “I know lots of other people my age that noticed that they felt sore and generally sick after their second dose in particular. I am interested to see what information comes out as they continue to study the vaccination results.”

On the other hand, Zach Brody ’23 was told by his family members that they experienced extreme discomfort after the second dose. Brody did not share this experience, as his reaction was less intrusive.

“I had little to no reaction on both the first and the second vaccine,” Brody said. “My arm is still a little bit sore, and I got slightly tired about four to six hours after the shot, but other than that, I had no other reactions. I had a few family members tell me they felt poor shortly after the second dose, so that was in my head, but [the second shot] didn’t really affect me.”

Despite the discomfort, Brody acknowledges that the benefits outweigh the detriments in terms of protection. Although there is no definitive outcome for every vaccine recipient, he says that the side effects were not initially demoralizing because of the mostly-assured efficiency of the shot.

Some beneficiaries who previously had COVID were concerned that their reactions to the vaccine would be amplified because they already contained antibodies. After being fully vaccinated, an anonymous faculty member realized that their reaction was more intense compared to their non-infected counterparts.

“I do think having COVID previously produced a stronger reaction [for me] after the vaccine,” an anonymous vaccinated faculty member said. “After the first shot, I was really sick and unable to get out of bed for about 24 hours. My head and body ached tremendously. After the second, I started feeling ill within a few hours. I was in bed for about three days and didn’t fully feel okay until about 4-5 days later. I had a high fever, chills and could not move my arm at all.”

“After having my first shot, my reaction was mild. Aside from the arm soreness lasting three days, my headache only lasted until the following morning,” Kessler said. “[After my second shot,] I felt lightheaded and was bouncing back from freezing to overheating. After being in bed and sleeping the whole day, I felt fine [the following day]. A friend of mine who previously tested positive just got his first shot, and his reaction was the same as my second.”

Aside from the possibility of a physical reaction, Brody said that he felt safe while receiving his shot and was at ease leading up to the vaccination date.

“I felt very safe both before and after getting my vaccine,” Brody said. “I attribute that to the effort of medical professionals. Overall, [the shot] didn’t really hurt and the potential side effects weren’t off-putting.”