“Veganuary” challenges students to be mindful of environmental impact 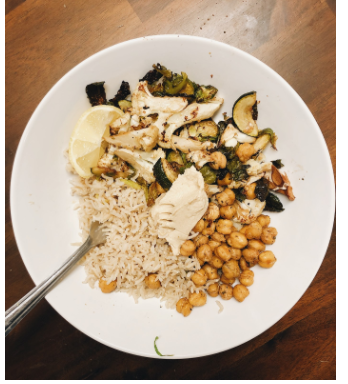 Students at Staples participate in Veganuary, a 31-day challenge to eat vegan during January, in order to make a positive impact on animals, the environment and their health.

In today’s day and age, eating vegan is easier than ever before. Meat, eggs and dairy all have their plant-based counterparts, which can be found in nearly every grocery store. Veganuary, a UK based organization, challenges the world to take the leap and participate in the “Veganuary” challenge, where participants go vegan during the month of January.

Some students in the Staples community decided to take on “Veganuary,” a 31-day vegan challenge, to be more conscious of their impact on animals, the environment and their health.

Teagan Smith ’21 heard about the Veganuary challenge through Instagram and decided to participate this 2021.

“[Veganuary] really struck me because I thought it would be a good challenge […] in my goal of having less [of an] environmental impact,” Smith said.

As President of Club Green at Staples, which focuses on spreading environmental awareness, Smith participated in Veganuary as a way to decrease her negative environmental impact.

“I weigh the impact of everything I do in my life,” Smith said, “so making this change, even if it’s small and inconsequential in the grand scheme of things, has given me a bit more of a clear conscience environmentally.”

Along with Smith, celebrities such as Alec Baldwin and Paul McCarthy have shown their support for Veganuary with their testimonies on the website. Companies such as Ikea and Starbucks have also shown their support by creating vegan menu items. With over one million Veganuary participants since 2014, the Veganuary organization has made progress in accomplishing its goal of spreading veganism.

“Our vision is simple; we want a vegan world,” the Veganuary website says. “A world without animal farms and slaughterhouses. A world where food production does not decimate forests, pollute rivers and oceans, exacerbate climate change, and drive wild animal populations to extinction.”

For Smith, however, the main obstacle is finding vegan meals she can make in a rush.

“It’s definitely been a commitment looking for recipes, and it’s much harder to find quick meals when I’m short on time,” she said.

However, TikTok creators have been posting both simple and gourmet recipes on their platforms. Food creator, Jeremy Scheck, who has 1.9 million TikTok followers, has taken on the challenge and has posted a new vegan recipe almost every day of January.

Although the challenge lasts one month, the Veganuary website encourages those who try it to stick to veganism longer, providing recipes, nutritional advice and more. Sadie Goldman ’22 has been vegan for years. She decided to commit to a vegan lifestyle three years ago after learning about the positive impacts.

“Veganism has allowed me to think a lot more about what types of food I am putting into my body, what type of shoes and clothing I am buying and how it will impact the environment,” she said.

Goldman encourages people to try veganism, even for a short period of time, as they might find that they want to pursue it longer.

“People going vegan, no matter how long or short it is, will make an impact on the environment which is what we need. […] No one is forcing you to stay vegan for the rest of your life, but some people may realize just how much they enjoy it,” she. said

Fortunately, there are many vegan options in Westport and neighboring towns. Organika, Organic Krush and Green & Tonic are just a handful of the many restaurants that offer vegan items nearby.

Brenner Dick ’23 recommends his mother’s 100% vegan restaurant, The Stand Vegan Cafe, in Fairfield, which serves “meatball” subs and mac and “cheese,” along with many other dishes.

“[The Stand Vegan Cafe] is a great restaurant all around that only serves vegan food,” Dick said. It’s a great intro to vegan food and is really approachable.”

Overall, as the rise of veganism occurs, more people and companies are gearing towards plant-based foods to create a positive impact on the world. Veganuary has encouraged students to take change into their own hands.

“I think my goal of helping the environment in any way I can,” Smith said, “has really been what has allowed me to stick to this.”