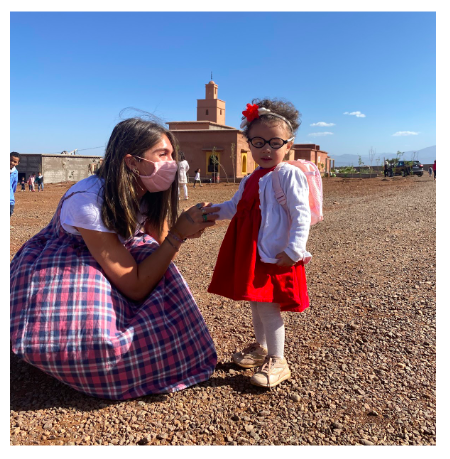 Remi Levitt ’21 used Staples’ period of remote learning to give back to Moroccan children in the village of Atlas Kinder.

Although COVID-19 has negatively changed daily life, many students have used the effects of this pandemic to benefit the people around them. In the case of Remi Levitt ’21, she  used Staples’ period of remote learning to give back to communities overseas.

Last month, Levitt flew to Morocco to volunteer with Atlas Kinder, a village and organization home for abandoned children who are taken care of by the surrounding community.

“Everyone there was so grateful for any help they could get, especially in times as difficult as these,” Levitt said.

The village is located in Tahanaout and was started five years ago by a Swiss man named Hans Huber. “Mothers” come from mountains in the neighboring village to take care of the 154 children there.

Levitt’s work was completely voluntary, and she does this out of the pure feeling of joy it gives to both her and the children she works with.

“The amount of love and energy that these children have is infectious and made being there so amazing,” Levitt said. “I loved being able to make the children smile and [being]  surrounded by beautiful souls who dedicate their life to helping these children grow up happy.”

According to Levitt, Morocco is unlike any other country she’s been to; the people are incredibly welcoming and loving. While she was there, Levitt became closer with two workers for the operation, Hamid and Yassir, who both have been working at the village since it began. Connections like these are things she will never forget.

“My favorite part of the trip was meeting all the children and the people that worked at the village. It was overwhelming how many new, deep connections I was able to make and how many people shared their life stories with me,” Levitt said.

Traveling in a pandemic is risky, but with COVID-19 regulations in Morrocan cities that are similar to America’s and safety measures taken in airports, Levitt made sure to stay safe throughout the whole trip.

“I first got a negative COVID-19 test before boarding the plane to ensure I was safe to fly. I wore a mask wherever I went, and almost every person was wearing masks even when just walking around outdoors,” Levitt said.

Besides finding a lot of gratitude in the work she does for Atlas Kinder, Levitt also greatly enjoys the atmosphere and beauty of Morocco. She was able to connect with the culture, as it felt like everybody was looking out for her and wanting to be as helpful as possible.

“What is so amazing about Morocco is how you can go from the city of Gueliz in Marrakech — which resembles a cool mix of Los Angeles and African culture — to Tahanaout with beautiful mountains and desert paths,” Levitt said.

Levitt plans to continue her work beyond this one trip. She will be going back to work in the village again in February. Depending on whether school will be fully remote or not, she may stay at the village for weeks and complete her classes there.

Along with her mother, who introduced her to the village, she plans on starting the American Friends of Atlas Kinder foundation, or AFAK for short. She was inspired to do this because of how much more work she recognized had to be done even when she wasn’t able to physically volunteer with the children.

“[AFAK] will allow for a gateway for Americans to become involved in helping the foundation through volunteer work and monetary donations that can be tax deductible,” Levitt said. “I hope to use this foundation to broaden the reach of Atlas Kinder and inform people about the devastating child abandonment issues that plague Morocco.”