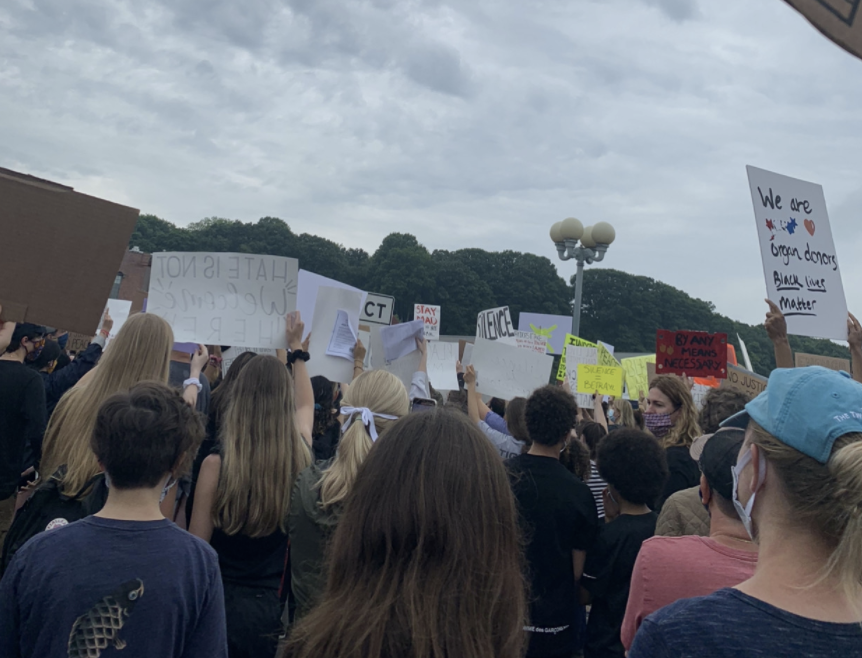 The Black Lives Matter protest located in Downtown Westport took place last June. The event was organized by Staples students and attracted a large crowd of teens along with residents of Westport and neighboring towns.

As anyone who has studied U.S. history knows, young people have been at the forefront of bringing change in America. In the early 1900s, news boys went on strike and helped achieve rights for young workers. In the 1960s during the Civil Rights movement, young people participated in protests and marches to fight for equality for Black Americans. In 2019, then 16-year-old, Greta Thunberg sailed across the Atlantic ocean to bring awareness to galvanize the world to focus on the dangers of climate change.

Teens prove that you don’t have to be old enough to vote to create change. There are many ways in which people can make their voices heard. The events that have transpired in recent years have created another wave of teenage activism.

“Students today are engaged more than ever in politics and activism and that is super inspiring to me, ” Nell-Ayn Lynch, Honors U.S. History teacher, said. “I have been teaching here [at Staples] since 2016, and I feel the activism has grown so much.”

Staples students have gotten involved in activism in many ways. Some have organized events like protests or marches while others have taken to social media to spread their message. Niah Michel ’20 and Isabel Geelan ’20 were two of the students who organized  the Black Lives Matter (BLM) protest in Westport this past June.

Westport residents of all ages took to the streets to support their cause. Abby Kalman ’22 was one of many Staples students who supported the BLM movement.

“Informational slideshows were constantly put on Instagram, made by younger students from all over during the BLM protests,” Kalman said.

Growing up in the age of social media gives teens unique powers. Platforms like Instagram and Facebook allow teens to educate and learn from each other. Social media also makes it easier for teens to organize events like marches and protests to fight for change.

“One of the members of our club recently held a phone bank to promote the re-election of Senator Will Haskell,” Sophia Kessler ’22, social media director of the club said. “A few of us even participated in his internship program this summer and continue through his re-election campaign.”

Following a historic election, there are gigantic divisions in our country and students feel that now more than ever, it is important to participate. You don’t have to be Greta Thunberg, but there are many ways to make a difference.

“We are living in a crucial time,” Kessler said, “where it is important to at least know a little but about what’s going on around you.”