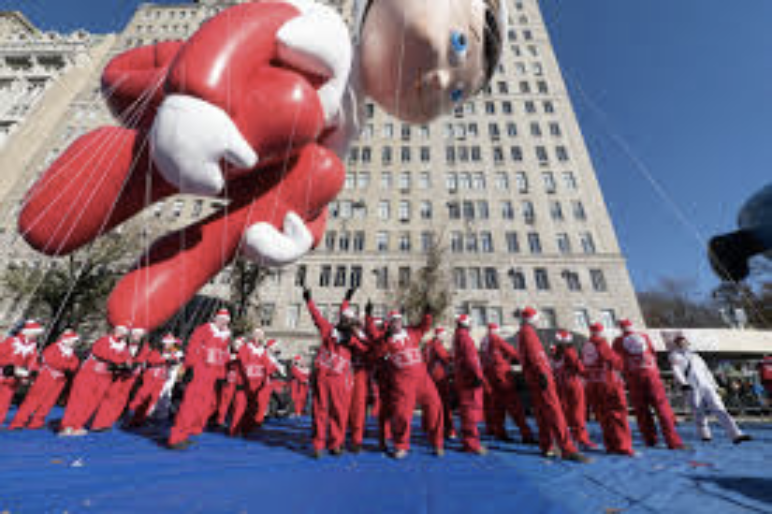 The Macy’s Thanksgiving Day Parade will not have an in-person audience this year to abide by Covid restrictions. Instead the parade will be televised on NBC from 9a.m. to noon on Nov. 26.

The famous parade in Manhattan filled with balloons and performers is sure to entertain even if it is through a screen. COVID-19 has caused many events to be postponed or canceled, but the Macy’s Thanksgiving Day Parade has persisted with modifications to adjust to the pandemic.

While there won’t be an in-person audience, the 94th annual parade will be televised on NBC from nine a.m. to noon. Precautions such as social distancing and masks will be instilled to ensure the safety of the performers which include Jordin Sparks, Pentatonix and Bebe Rexha. People all across the country will be able to enjoy the event from home.

Manhattan is a short train ride from Staples, and in the past many students have attended the parade themselves. While they are disappointed that there won’t be an in-person audience, many students will be watching at home.

“The cases are so high in NYC and the NYC schools just closed [so] I think it’s really smart of them to not allow in-person visits this year,” Olivia Beck ’21 said, “but I also think it’s kind of sad since it’s a tradition.”

Macy’s has also cut the parade staff  by 70%. Fewer than 2000 people will film the event over the span of two days. While this is still a large gathering, that number doesn’t compare to last year’s 10,000 participants and viewers. With the combination of mask wearing, social distancing and being outside, the safety of all staff members and performers is ensured.

Normally the balloons and performers travel through the streets of the city. However, the route of the parade has also been changed this year.

“The [parade] will not be traveling their typica […] two-and-a-half-mile route starting at West 77th Street. They will be gliding just one city block down 34th Street, near the flagship department store,”The New York Times wrote.

Many are thankful that the parade is still able to take place but will miss the thrilling experience of being so close to the floats when in-person.

“It was super cool to see it live [in-person] because I grew up watching it on tv and it was cool to see all the floats and balloons in real life and how big they are,” Stella Beck ’23 said.

Usually the parade provides opportunities for young performers to take part in marching bands or dance routines, but this year all performers must be over the age of 18.

The parade has always been about spreading happiness and holiday cheer. As it persists in a year of so many cancelations, the tradition continues on, and the parade achieves its goal.

“Our events are all about giving back to people, celebrating traditions, celebrating American history and American holidays,” Susan Tercero, the Executive Producer of Macy’s Thanksgiving Day Parade, said to App. “We also felt beyond that we had an obligation to the country to continue with this very important tradition, especially in a year where things are looking and feeling so different for everybody.”