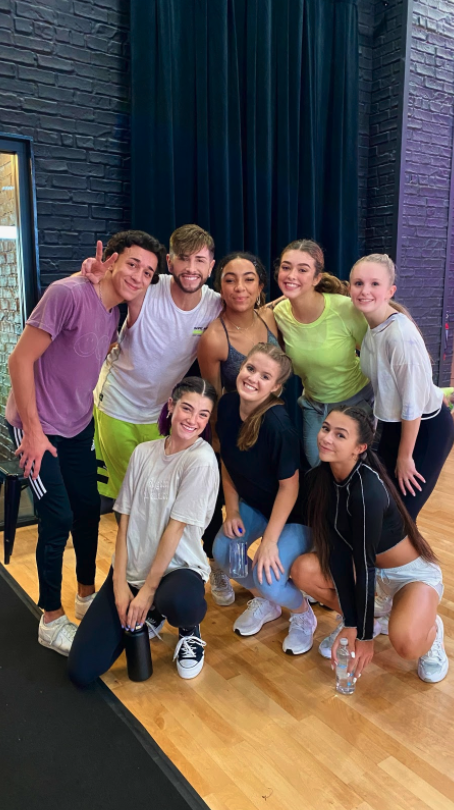 Kaitlyn Constantino ’21 (far right) was one of six dancers chosen to dance along Tik Tok star Charli D’Amelio. Constantino’s trip to film the virtual dance class included a coronavirus test as well as daily temperature checks to ensure they could dance in the studio without masks.

With her hair in a low ponytail and dressed in a white crop top and sneakers, Kaitlyn Constantino ’21 dances in front of a dance studio mirror, just as she does for hours every week. But a few details set this moment apart from a typical week. For one, Constantino is in Los Angeles, nearly 3,000 miles from her home in Westport. And two, she is dancing alongside Tik Tok star Charli D’Amelio (dubbed ‘the most popular person on the internet right now’), with a camera streaming her every movement to thousands of viewers around the world.

Constantino was one of few dancers chosen by D’Amelio to dance alongside her in her virtual dance class, ‘Charli Beaks the Floor.’ The class functioned almost like a modern day Jane Fonda workout; in summary, a group of teenagers-including D’Amelio and Constantino- learn a dance while viewers around the world can do the same from their own living room. Unlike Fonda’s iconic workout videos, however, viewers were watching live.

“It was crazy and surreal thinking that so many people were watching” Constantino said. “There were people from Spain, Ireland, Australia…people just all over…but there was no one actually there. So really I was just dancing in front of a mirror which I do every day.”

Despite the pandemic and the regulations that came along with it, Constantino felt that traveling, dancing and being in Los Angeles felt somewhat normal and relatively safe. Constantino received a coronavirus test before departure as well as daily temperature checks that allowed the dancers to be in the studio without masks.

Being able to dance and interact with others without wearing a mask was like returning to normalcy for Constantino. Because of the physicality of dance, the shift to virtual learning was a difficult adjustment. However, Constantino pointed out all the benefits that came with virtual dance classes.

“When you’re virtually learning it’s kind of cool because no ones watching you,” Constantino said. “You can kind of just be yourself and totally just let go and dance to the best of your ability. And it doesn’t matter if you mess up or don’t know what’s going on because you’re just having fun. That was something that was cool about ‘Charli brakes the floor.’”

D’Amelio’s popularity skyrocketed around last summer when her first Tik Tok video went viral. But Constantino has known her much longer than that.

“I have known Charli since I was probably in 7th grade,” Costnatino said. “We met dancing and we used to be on the same competition team so I’ve known her for years. She has always just been so sweet and so nice to everyone.”

Constantino describes watching her friend rise to fame as exciting and seems to almost regard it with a sense of inevitability.

“It was cool seeing everyone discover her because I’ve always known she was a really cool person,” Constantino said.

Constantino’s own dancing career started when she was in 5th grade, starting to compete at age 12.  Through her dance studio, the Spot JD, she’s had an array of dance education with everything from Jazz to Hip Hop.

“It is such a variety because no two styes of dance are similar so you get to experience all kinds of things and they’re all really cool in their own way” Constantino said.

Now, she spends over 20 hours at the studio a week.

“I love the dance community,” Constantino said. “I love dancers […] I think they are a different breed.”

The dance world is, however, infamous for its competitiveness and body stereotyping. But Constanto says that her teachers have actually taught her self-love.

“I see my teachers as my friends and kind of like older sisters,” Constantino said. “They’ve all taught me really important things about being myself and loving myself and just kind of accepting who you are because there’s a lot of comparing in the dance world.”

With college looming ahead, Constantino has had a lot of time to reflect on what her next few years as a dancer will like.

“As of right now I’m not sure what I was to do in terms of how long I want to dance for,” Constanino said. “[…] I don’t know if I want to be more serious in the dance world or just more for fun.”

“I think that social media is such an amazing platform to share your passion for dance because you can post any style and anyone can see it and it’s a really fun way to show who you are through dancing,” Constantino said. “You can learn a lot about a person through the way they dance so you can kind of get to know a person just by watching them move.”