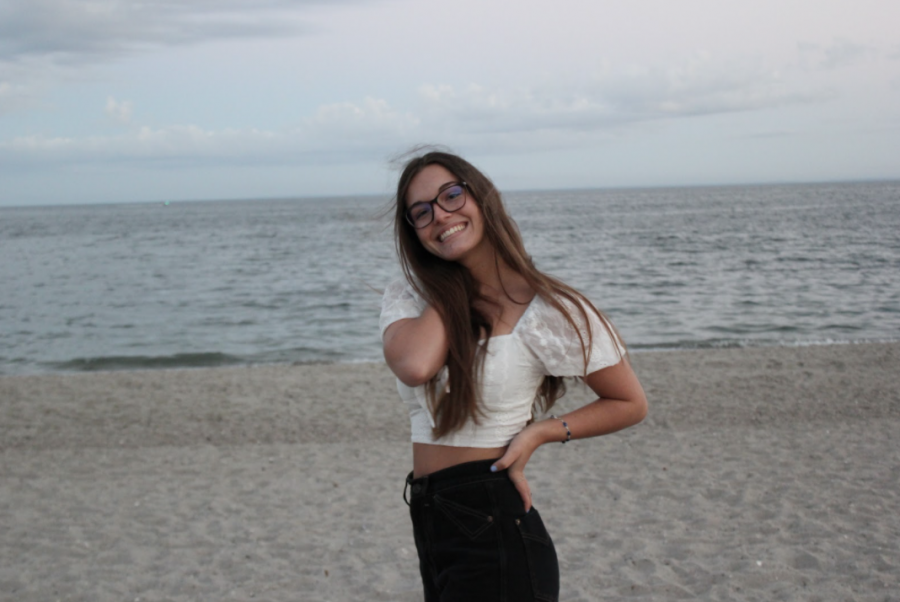 Raia Badurina ’23 moved to Westport in April during the pandemic. Despite the challenges she has faced as a new student during COVID-19, Badurina continues to think positively about her situation.

Raia Badurina ’23 did not picture her first day back in school to be littered by one-way hallways, plastic dividers at lunch and a sea of mask-wearing, unfamiliar students.

In fact, she did not expect her first day of school post-quarantine to be at Staples–over 2,500 miles away from her hometown of Las Vegas, Nevada.

On March 13, as a response to the coronavirus pandemic, Nevada schools canceled the rest of the academic year entirely. Badurina’s former school, Palo Verde High School, was no exception. Unlike Staples, Palo Verde did not offer online classes or distance learning to students. Badurina was already planning on moving to Westport over the summer, but moved in April, during the peak of national quarantine instead.

“I moved when quarantine was at its prime–so the hotels weren’t open–and I slept in the car with my stuff in the back seat,” Badurina said. “It was pretty bad.”

Despite the long trip to Westport, Badurina remained optimistic. Over the summer, she met a few Staples students that like her were rising sophomores. Unfortunately, once school started, many of the students she met were not in her cohort, and those who were did not share classes or lunch waves.

“For the first day, I was worried about getting lost and having lunch, as I feel like every new person would,” Badurina said. “I walked in, there were one-way hallways, and I didn’t know which direction the floors went, so that was definitely weird.”

Elle Tesoriero ’23, one of the students Badurina met over the summer, regretted that she was unable to guide her new friend through Staples.

“I was so disappointed that I couldn’t support [Badurina] on her first day of school,” Tesoriero said. “Being new to a school is obviously very stressful for anyone in a normal year. However, COVID and wearing masks definitely put a new wrinkle on starting the school year.”

After living in Westport for a few months, Badurina noticed that the local community seems to be slightly less outgoing compared to Las Vegas. She guessed that most of this was because she moved during the pandemic.

“In Las Vegas, people would always come up and say hi to you randomly,” Badurina said. “So when I went to the beach, I thought I would be able to make lots of friends, but that didn’t happen, because COVID makes communication harder in general.”

In school, wearing masks and keeping distance also makes it harder for Badurina to  communicate with peers.

“I felt really out of place because I always want to talk to people, but a lot of kids didn’t talk that much, probably because of the masks, social distancing and all of the other weirdness that comes with COVID,” Badurina said. “I think that after a few weeks, once everyone gets used to wearing the masks and keeping distance, it’ll be easier.”

Additionally, Badurina is not the biggest fan of the hybrid model. She finds that distance learning and remote days are not as engaging, and she looks forward to going back to school full-time.

“When my school closed [in Nevada], we didn’t even have distance learning. But here [in Westport], school kept going,” Badurina said. “So, it was weird for me to log into online classes for half of the week and be in the building for the other half of the week.”

Regardless of the complications Badurina has faced because of COVID-19, she is excited to become a part of the Staples community. She participates in Staples Players and looks forward to playing the role of Flora in the radio show, “It’s a Wonderful Life.”

Badurina’s dad, Ben Badurina, believes that despite the hardships, his daughter will adapt to Staples well.

“[I] certainly feel it will be a more challenging adjustment,” Ben Badurina said. “But, [I] feel [Raia] is up for it.”

Ultimately, Badurina feels that adjusting to Staples is going to be a challenge that may take more time than she anticipated. Nonetheless, she continues to be positive.

“I think it would’ve been easier had I not moved during COVID. It’s a really weird time for everyone, but especially for someone who has to adjust to a whole new life here in the middle of all of this,” Badurina said. “But, I think the school is great, there are so many opportunities, and hopefully once this ends, or becomes more normal, it’ll be better[…] I don’t regret it.”