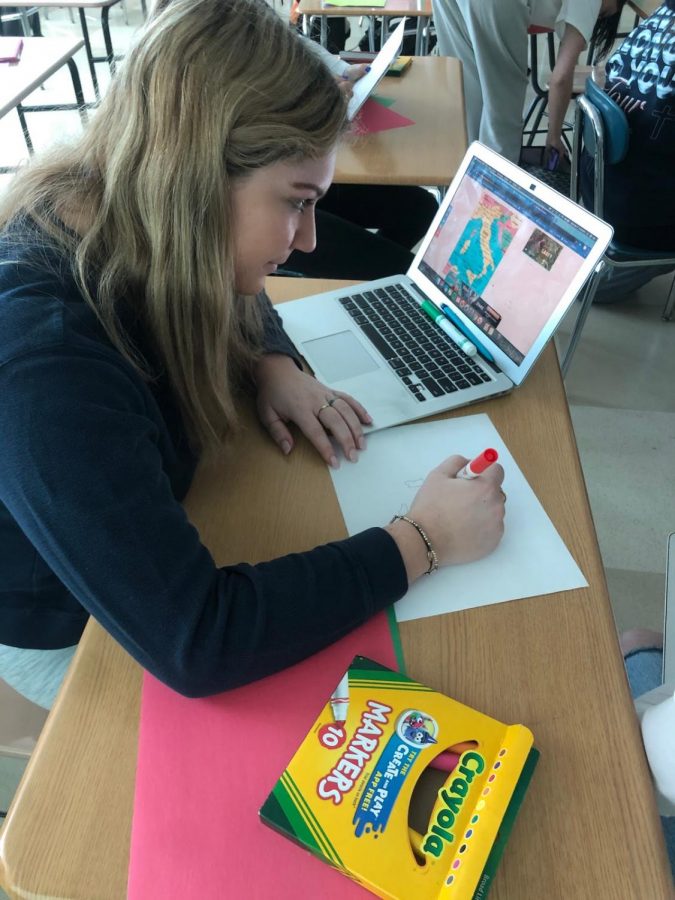 Ellee Seitz ’21 works on posters to promote work language week during her honors Italian class. Many world language classes spent time making and hanging up posters around the school.

All over the country, the first weeks of March are recognized as World Language Week. The week promotes and celebrates foreign languages and cultures from all around the world. While it has not taken place at Staples in over 10 years, World Language Week made its return on Monday March 9 and will continue on until Tuesday March 17.

According to Italian teacher Louisa D’Amore, bringing back world language week had been a discussion between language teachers for many years.

“Finally this year, along with the members of the Circolo Italiano club who really pushed for it, the teachers came together and decided to make it happen,” D’Amore said.
World language teachers and students all gathered together on many different occasions in order to share ideas and figure out how they could make the week as educational yet fun as possible.

Each day started off with a morning announcement in the “language of the day” from students, in addition to music in that language being played over the loudspeakers before and after school.

“[World Language Week is an] opportunity for students who take world languages to show off what they know, celebrate the culture that they have been studying, and it will also be a way to teach the school at least a little about what they have learned,” D’Amore said.

On Monday, March 9, World Language Week began with a Chinese themed day filled with many activities.

“The Chinese program at Staples planned many activities for the entire student body to become more acquainted with the language and culture during World Language Week,” Chinese teacher Lilli Kessinger said.

When students walked into school, they learned about Chinese philosophy by receiving a Confucian saying as they entered the building. Students and teachers of the language also held a Chinese tea tasting outside of the cafeteria during the lunch waves and allowed students to come into their classes to participate in activities with them.
On Thursday, March 12, the day was dedicated to Italian culture. Members of the Italian club and classes worked on posters and hung them up around the school. During lunch, students sold lollipops, Kinder eggs and rubber bracelets in order to raise money for Centro La Tenda, a non-profit organization in Napoli. At the end of the day, a bake sale was held to raise money for Centro La Tenda as well.

Many students really enjoyed celebrating World Language Week for the first time, and hope that it will continue annually at Staples.

“As a student of both Spanish and Italian, in addition to being Greek, I thought it was awesome to see all of the different cultures being represented,” Ellee Seitz ’21 said. “I hope to see World Language Week at our school next year and for many years to come.”