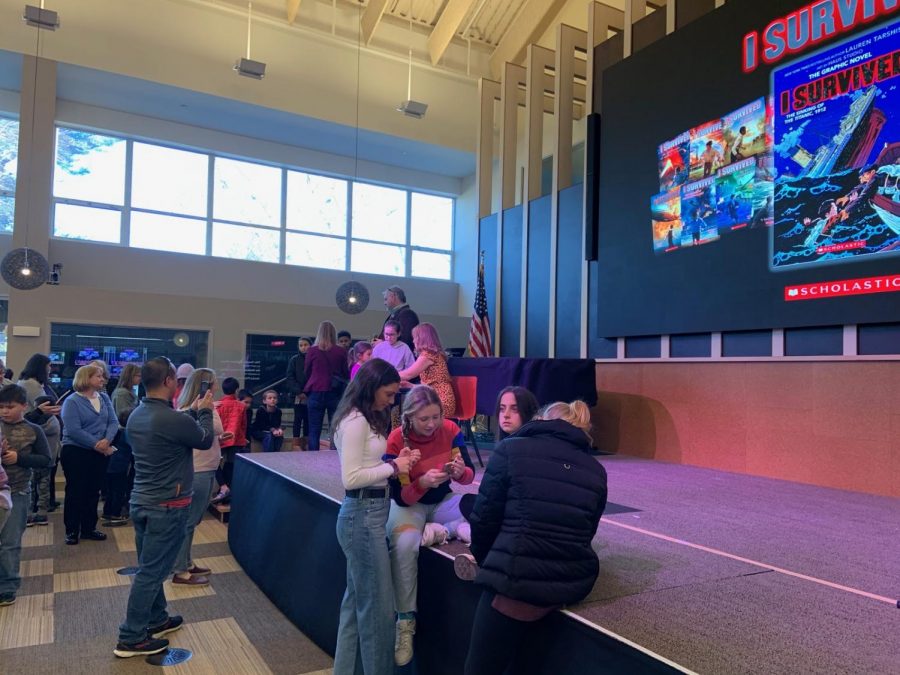 Readers wait in line to get their copy of “I Survived The Sinking Of The Titanic, 1912” signed by author Lauren Tarshis.

Most Staples’ students know the book series, “I Survived” by Lauren Tarshis ’81; little do they know she is a Westport native.

Tarshis is the Senior Vice President and Editor-in-Chief of Scholastic Magazine. Her first series was “Emma Jean Lazarus, Fell Out of a Tree” and she then began the “I Survived” series. Tarshis has published over 19 books in the series and is in the works of more.

On March 1, Tarshis had a book release party at the Westport Public Library for her first graphic novel, “I Survived Graphic Novel #1: I Survived the Sinking of the Titanic, 1912.”

“If you told me one day I would be at the Westport Library with hundreds of people I would think that is completely absurd,” Tarshis said.

There were over 350 guests there, all to hear Tarshis speak and get their new book signed. Students from Daisy Elementary School traveled an hour and a half to be at the event.

The “I Survived” series are books about historical events but put in a way for an elementary school student to understand.

“I get to experience the book and I can just dream away. It’s my way of being part of [that historical event]. It’s my favorite series,” third-grader at Coleytown Elementary School, Dylan Marks, said.

Many parents enjoyed the event as Tarshis’s books help their children to understand history.

“She really inspires him to read more, her stories are of interest and are about moments of time that he won’t be able to experience,” Abby Manning, a parent, said.

It was not easy for Tarshis to get where she is today; writing for children was not her first choice of writing.

“I never [would] imagine that I would become a writer and had zero interest in being a child writer,” Tarshis said. “But I fell in love with it which opened the door for me in the whole world of children writing.”

Tarshis has three sons, Leo Dreyfuss ’08, Jeremy Dreyfuss ’11, Dylan Dreyfuss ’16 and her daughter Valerie Dreyfuss ’22, who is currently a student.

“It’s so funny that most of my friends knew about my mother from her books before they knew me,” Dreyfuss said.

When Tarshis began publishing her books in 2010, many Staples students were at the targeted age of readers, which is second through seventh grade.

“When I was young they were my favorite books to read and I have read almost all of them,” Andrew O’loughlin ’22 said. “They taught me about history in a fun way because it was incorporated as a story.”