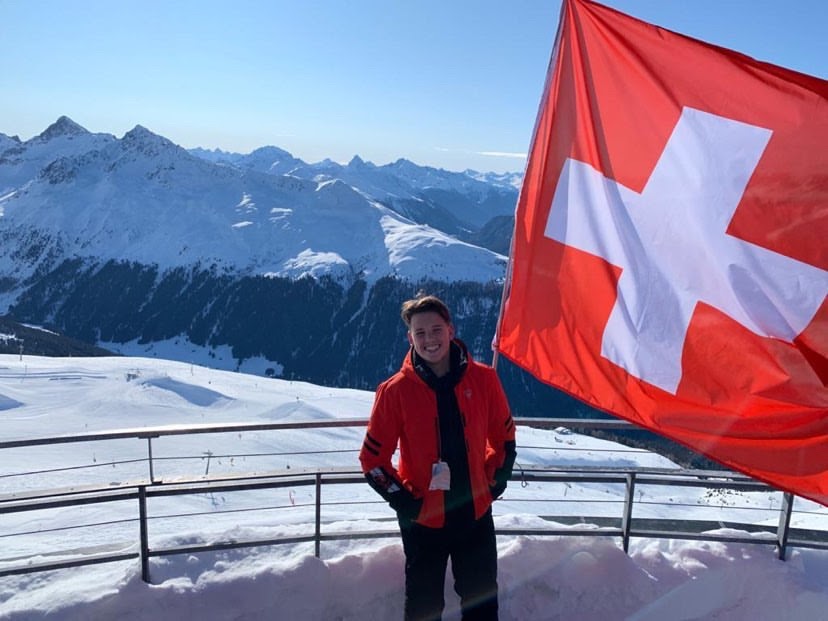 Dobin-Smith smiles next to flag of Switzerland during a quick exploration of the Swiss Alps. The group house he would share with other participants of the Wisdom Accelerator for Youth program is located across the valley.

Each year, an area of coastal ecosystem larger than New York is destroyed. Every 45 minutes in Louisiana, an entire football field of land vanishes from rising sea levels. And over one million species around the planet run the risk of extinction due to habitat loss, disappearing ecosystems and ocean acidification.

After he participated in the Wisdom Accelerator for Youth (WAY) program and attended discussions at the World Economic Forum (WEF) in Davos, Switzerland in January, James Dobin-Smith ’23 returned to Staples to spread the word about how and why action must be immediately taken to combat climate change.

“The sea starts to rise, storms start to happen much more often and a lot of people start to die,” Dobin-Smith said. “So we have to do something now because when we get to that point, then there’s really not much we can do.”

The WAY’s leadership program convened a small classroom-sized group of driven, ambitious teenagers from nations around the world. They participated in different types of activities that allowed them to bond, become informed in different fields they found globally relevant and subsequently share their knowledge with their peers at home.

Out of the 16 teenagers that attended the program, Dobin-Smith was joined by only one other American. Throughout the week, he collaborated and bonded with students leading vastly different lifestyles whose countries have already taken bold steps ahead of the United States to promote more environmentally-friendly systems and infrastructure.

“As a student, I don’t see lots of climate action actually happening [in Connecticut],” Dobin-Smith said. “I see lots of talk […] but there are people in Switzerland, in France, in Brazil who are actually not producing any waste at all.”

Dobin-Smith attended the WAY’s program during the week that the WEF held meetings in Davos. Headquartered in Geneva, Switzerland, the WEF is an international nonprofit organization that engages the most prominent cultural, political, business and economic leaders in society to address regional, global and industrial agendas.

During the week of Jan. 20, the WEF held open panel conferences on the risks of climate change to planet Earth and engaged panelists to brainstorm long-term solutions to stave off widespread disaster. In addition to global leaders Jane Goodall and Prince Charles who made contributions to the event, 17-year-old Swedish activist Greta Thunberg identified the major issue that even the world’s most powerful business and political leaders had been avoiding.

“No political ideology or economic structure has been able to tackle the climate and environmental emergency and create a cohesive and sustainable world,” Thunberg said, as restated by the New York Times. “Because that world, in case you haven’t noticed, is currently on fire.”

“It’s almost like [the federal government] doesn’t even believe that climate change is real,” Peltier said, while speaking at Davos in a video by CBC News. “We all say climate change is a real thing and they’re not realizing that. Basically, what [youth activists] are all trying to do is convince them and try to tell them that they need to listen to us.”

With the newly applied pressure that activists of all ages are putting on federal governments to introduce eco-friendly policies, different ways to carry out climate action were a hot topic at Davos. The push for the implementation of sustainable development was one such point that caught Dobin-Smith’s eye.

He asserted that the Staples community could be contributing more significantly to waste reduction and the enforcement of recycling at a local level.

“In the cafeteria, there are no recycling bins,” Dobin-Smith said. “It’s just these giant roll-around trash bins that get dumped into the landfill.”

Since the student body depends heavily on a convenience factor while moving around the school during the day, Dobin-Smith described a simple solution to the lack of recycling. He illustrated that trash cans should be lowered to the ground while recycling bins can be brought up to hip level, making recycling easier for hurried students.

Moreover, one component of Dobin-Smith’s experience that played a fundamental role in shaping his view of the push for climate reform was the experiences of his teenage counterparts from nations across the world. The contrast between their execution of a zero-waste lifestyle, as opposed to the lifestyle of most in the United States, inspired him to bring about change in his own home.

Dobin-Smith has since relocated his recycling bin within his home to make it easily available and worked with his mother to buy more food items in bulk to avoid purchasing packaged goods.

“Just talking about solving climate change isn’t going to do anything,” Dobin-Smith said. “By getting in the streets with signs, it’s a little bit more of a step, but without actually taking action, you’re not really solving the problem.”