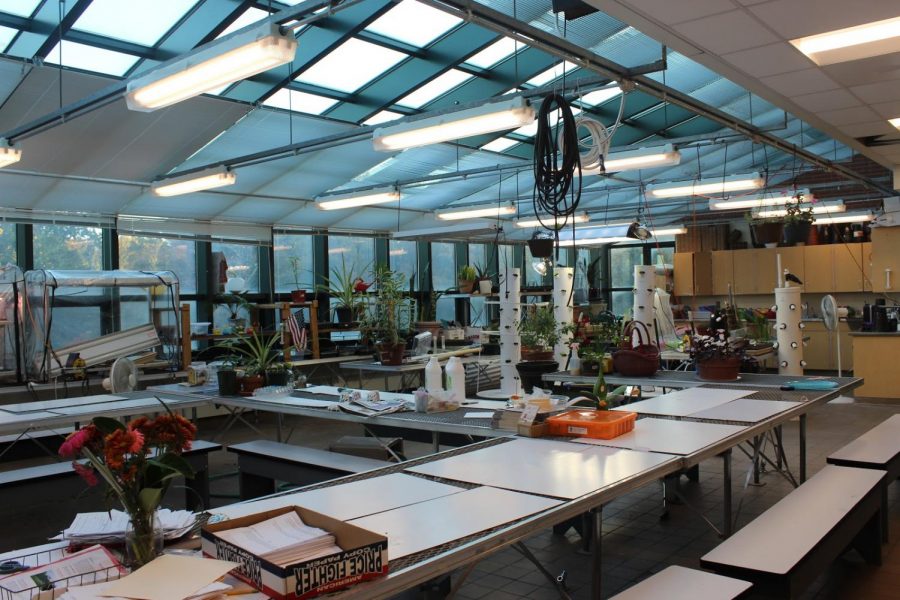 The Horticulture classroom offers students countless resources to enhance their planting experience while learning in an engaging and unique environment.

With the hallways bustling with countless clubs to sign up for during the week of the Involvement Fair, some students may have missed a very interesting new one: the Horticulture Club. The club is a low-pressure club that meets every other Thursday and gives students the opportunity to garden to their heart’s content in a welcoming environment.
This new club, with presidents Mya Oldale ’21, Teresa Shahin ’21 and Lucy Belknap ’21, has attracted around 60 students by exhibiting an aim to introduce people of all kinds to planting. In addition, growing all sorts of vegetables and plants exposes them to a hobby that many find relaxing or a way to get away from the stresses of their everyday lives.
“You get joy…out of making something and being able to use what you’ve made… there’s something nice about that,” Belknap said. “It feels really rewarding.”
A recent study in the Netherlands, cited by CNN, found lower levels of cortisol, a stress hormone, in a group of people who were instructed to garden for 30 minutes, than in another group who were instructed to read for 30 minutes.
In addition to a way to reduce stress, the presidents also see the club as a way to make the seldomly used greenhouse, a place that receives the recognition and usage it deserves.
“A lot of people are interested in the greenhouse but they don’t ever get an opportunity to use it because you can really only take one class that spends the whole time there: horticulture,” Shahin said. “So the club is basically an opportunity to use that room more and its resources because it has so much cool stuff that no one really knows about.”
Though many people see gardening and horticulture as a way to let loose and relax, others see a more concrete benefit associated with the activity, both long and short term.
“A 2006 study found that gardening could lower risk of dementia by 36 percent,” the AARP (the American Association for Retired People) said. “Researchers tracked more than 2,800 people over the age of 60 for 16 years and concluded that physical activity, particularly gardening, could reduce the incidence of dementia in future years.”
However, while the personal benefits may have attracted a handful of students, an environmental aspect may have attracted lots of them as well.
“I care about the environment, and I believe in making the world a better, greener place,” Aaron Cheung ’22 said. “[I would] also [join the club] because I want to learn more about agriculture and gardening and horticulture.”