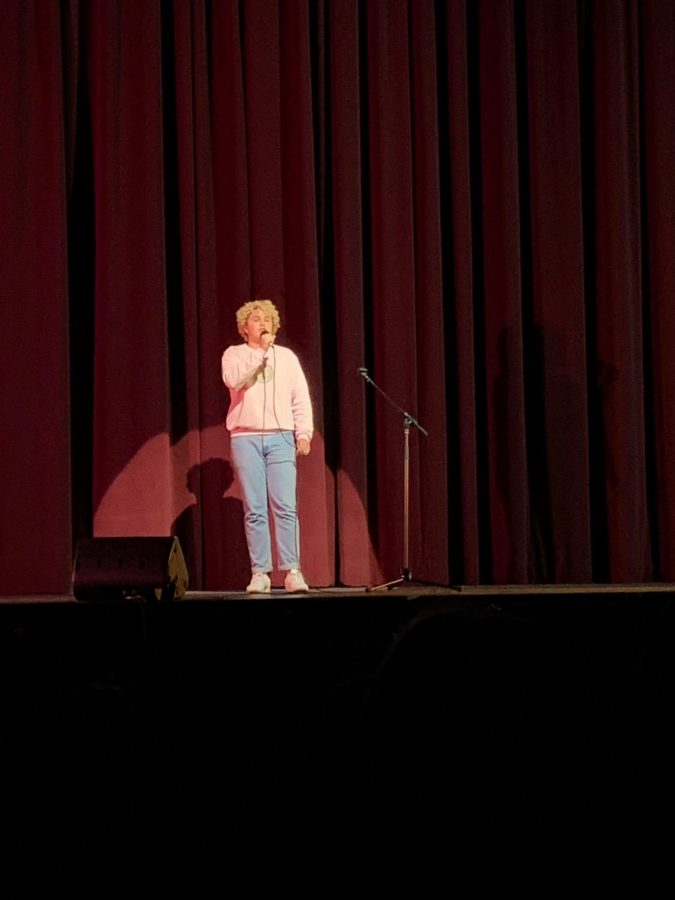 Ben Roland ‘19, a familiar face at the Variety Show, performs for the in front of the student-packed audience.

From juggling acts to full student rock bands, the Staples variety show is home to a plethora of interesting performances. On Monday, April 8, Staples students had the opportunity to try out to be a part of the 2019 variety show and show their talent to the ‘judges.’
When auditioning, performers share their act with the judging panel comprised of the Student Assembly president Luke Welsh ’19, Nina Udell ’20, Ava Sholes ’20 and English teacher Jamie Pacuk.
“In order to audition all you had to do was sign up through the Google form we sent out,” Welsh said. “We scheduled a time for them to try out, but no one really gets cut because we want as many people as possible, but we have a rehearsal to get a sense of time in between acts and the tempo of everything.”
The show has been a long-standing tradition of Staples, and many express the importance of having this for student talents. Graham Resnick ’20 participated in the show last year along with his blues band and believes that the variety show is a necessary event for Staples High School to hold.
“I chose to do [the variety show] the last few years because it’s just fun to get up and play music that people don’t necessarily listen to nowadays,” Resnick said. “The show gives me the chance to present to the school something that I am really interested in, and I think having a platform at Staples to do this is very important.”
The school community also sees the variety show as something to look forward to during the year. Since the variety show is held during school hours and attendance is mandatory, it allows all students to see the talent that Staples has.
“The variety show is one of my favorite parts of the school year,” Harley Bonn ’21 said. “In addition to the fact that we get to take a break from the day to watch [the show], it gives me the opportunity to see a whole new side of my own classmates.”