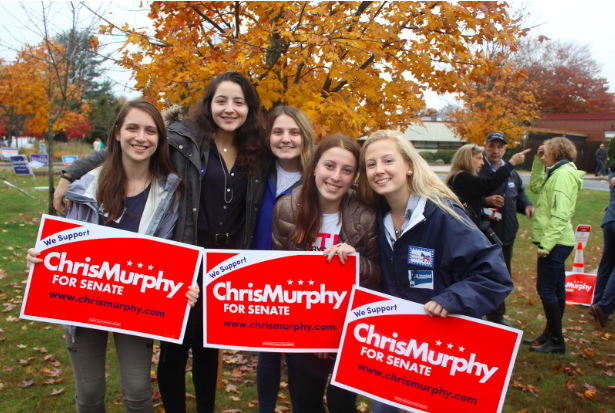 Rather than spending their free time with friends or doing homework, some high schoolers instead opted to volunteer at political campaigns. In a survey conducted by Zogby International, 22.4 percent of random 18-24 year olds volunteered for a political campaign. Many staples students were found doing the same.

As volunteers, students rang doorbells and called up constituents to raise support for their local congressmen.

“It’s important to be politically active as a young person, since we [may] soon be politicians ourselves,” Kylie Race ’21 said. “Volunteering allows teenagers to help make change even though we may not be old enough to vote or run for office ourselves.”

Through volunteering, students are able to better understand politics. Peter Clanton ’18 has always had an interest in international politics and thought it would benefit him to volunteer in various campaigns after joining the Staples Young Republicans.

“I figured that I should start on the local level and understand the local constituencies of Westport and Connecticut as a whole,” Clanton said.

Students who are considering a career in politics see the benefits as well. By volunteering, one can understand the inner workings of, and how to best run, a campaign.

Isabel Handa ’19, intrigued by the prospect of becoming a politician, considers the time she’s spent as a campaign volunteer to be “absolutely invaluable.”

Rather than push the beliefs of their candidate’s party on individuals, volunteers often try to promote civic engagement of any kind to those they reach out to.

“No matter the party, it is important that all Americans know the importance of their vote,” Autumn Smith ’21 said.

Many student campaign volunteers see themselves continuing to do so throughout their life.

“Hopefully in college I can get involved in local politics there,” Olivia Utter ’19 said, “especially if I go to school in a swing state.”