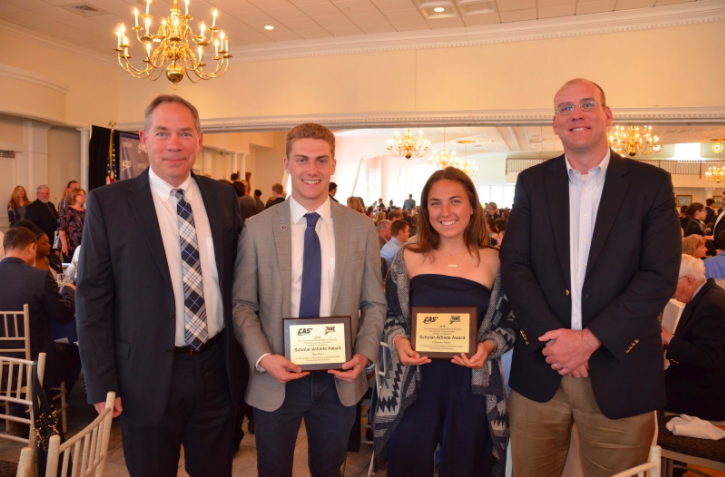 High school is a balancing act. It is a constant juggle between academics, sports, friends, mom and dad, college preparation and much more. It is normal to lose balance and fall down. For some, the act comes easy and walking the tightrope is something that they learn to do.

Christine Taylor ’18 and Ben Pearl ’18 were recently announced as the Scholar Athletes for Staples High School.

Each year, schools across the state choose one female and one male athlete whose, according to the Connecticut Association of Schools and Connecticut Interscholastic Athletic Conference, “academic and athletic careers have been exemplary, whose personal standards and achievement are a model to others, and who possess high levels of integrity, self-discipline and courage.”

Taylor started her freshman year as a three sport athlete playing field hockey, basketball and lacrosse. Taylor immediately found her spot on each of the three teams as a key player.

As a sophomore, Taylor was a three sport varsity athlete and excelled tremendously receiving All-FCIAC honorable mention for lacrosse and All-FCIAC west division for field hockey.

In her junior year, she was elected junior captain for field hockey and led the team to a state championship while receiving All-FCIAC for field hockey as well as second team all-state for her outstanding play.

Next year, Taylor will attend Trinity College where she will be playing both field hockey and lacrosse. “It is a huge honor to be given this award,” Taylor said. “It helps to be given an award that truly shows how much hard work pays off.”

Pearl has been a two sport athlete since his freshman year playing basketball and football, all the way to his senior year where he was captain for both Staples varsity teams.

Throughout his athletic career, Pearl has been very accomplished receiving Staples Scholar Athlete for football, Block S coaches award and FCIAC All-East Defensive Back. For basketball, he received the Haberstroh Award and was named to the Wilton Holiday all-tournament team.

Pearl’s IQ of both sports and ability to rally the team led him to two captainships in his senior year. “When Ben spoke, everyone listened, he truly defined a leader as he set a perfect example for everyone else to follow day in and day out,” Dylan Honig ’19, a teammate of Pearl for the past three years, said.

Both athletes have used their intelligence and athleticism to create both a positive and successful attitude for their teams throughout their years at Staples High School.

“It’s amazing to be recognized out of all the great athletes in the building,” Pearl said. “I am grateful for the prestigious award to be part of my legacy at Staples high school.”