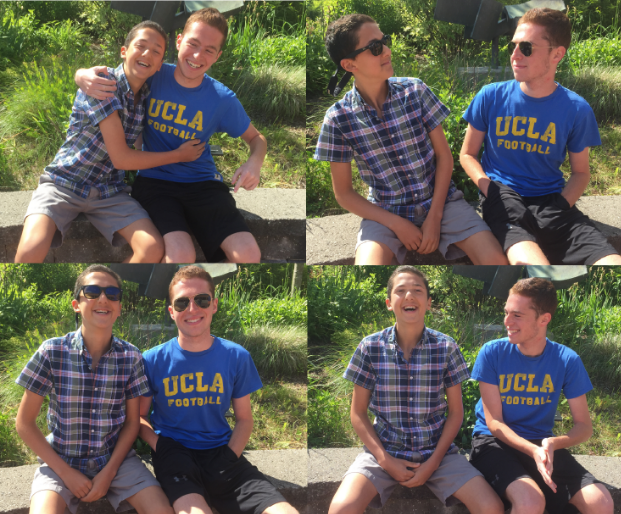 Zachary Edelman ’17 will never forget how he felt on the night of Tuesday May 3, sitting in room 1039.

“I saw JoJo [Adler ’16], Caroline [O’Kane ’16] and Ms. Didelot walk into the classroom after tallying the votes,” Edelman recalled. “I was looking down at the ground, thinking to myself, ‘we lost. There is no chance we won.’ At that moment, Jojo, Caroline and Ms. Didelot announced, ‘the new presidents are… Jacob and Zach.’”

“After we won, Zach and I had this moment where we jumped into each other’s arms while everyone was clapping. For us to win together was remarkable,” Bonn smiled.

“It was a textbook bro-moment,” Edelman agreed.

Now that best friends Jacob Bonn ’17 and Zachary Edelman ’17 are the co-presidents of Student Assembly and have settled into their role, they are prepared to take the club by storm.

Bonn joined Student Assembly going into his sophomore year because he knew the president at the time, Jennie Blumenfeld ’15.
“Jennie said I should get involved because I would learn a lot about how the school runs and what it takes to get students’ voice heard,” Bonn said. “I’m so glad I did.”

Edelman joined a year later because, “it was the most effective way that I could make my voice heard within the school,” he said. “I knew right after my first Student Assembly meeting that I wanted to be the president next year.”

Both Bonn and Edelman admire the club’s past leadership, specifically the presidency of Jojo Adler ’16.

“Jojo got the club back moving in the right direction,” Bonn said. “The year before this one, the club was kind of fading out. This year, Jojo really got the club to gain credibility, to actually be the voices of Staples and to be a club that people look forward going to.”

From her end, Adler could not be happier about Bonn and Edelman filling her shoes.
“They’re really passionate and have a lot of energy, which I know they will spread through the rest of the organization and hopefully throughout the school,” she said. “I’m confident they’ll do a fantastic job, and I can’t wait to see what they accomplish.”

What makes Bonn and Edelman’s presidency unique, however, is the fact that they are best friends and still manage to work well together.

“Jacob is one of my closest friends,” Edelman said. “We work very well together, and keep each other in check. Where I struggle, Jacob prospers, and vice versa.”

Claire Lonergan ’17, the club’s vice president, is also certain that Bonn and Edelman are going to “kill it,” primarily due to the fact that “they already have such a nice relationship with one another.”

The ability to lead a large group is essential to this presidency, according to the club’s faculty advisor, Ann Didelot.
“They really have the ability to be great leaders,” she said. “They’re vocal at meetings, they have great ideas and overall, they make a really good team.”
To Adler, “Leadership doesn’t have to be pioneering something,” she said. Regarding Bonn and Edelman’s leadership during her presidency, Adler confidently said, “They’ve shown it through being active members and showing commitment. They’ve never missed anything they’ve signed up for.”

With Bonn’s organization and inspiration and Edelman’s energy and ideas, the club is set for success.

“What makes me a great leader is that I am very perceptive,” Edelman said. “I am very good at telling what people are thinking or what people want. I see myself as someone who is driven and strong-willed, but who is also open to outside ideas and understands that it is okay to be wrong.”

Bonn, on the other hand, believes that he is “organized and knows the difference between having power and being too powerful,” he said. “With me, it’s all about having personable relationships––I know almost everyone in the club by name and a little bit about everyone.”

Although their personalities are distinct and their leadership methods vary, Bonn and Edelman both agree that Student Assembly is an important club and it is essential that they lead it to the best of their abilities.

“This club matters to the Staples community because, although cliché, it always matters for the students’ voices to be heard,” Edelman said. “And who knows the student body of Staples best other than Staples students themselves?”