Forgette Rocks Out to the Beat of his Band 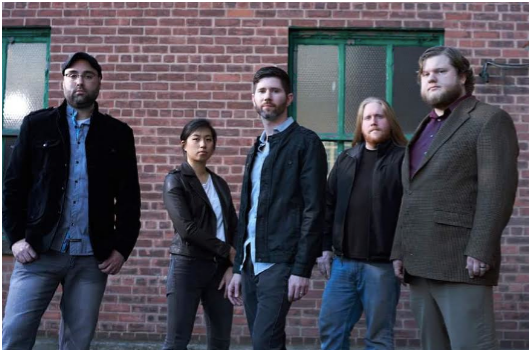 Whether it’s teaching math or engaging with his students, Anthony Forgette always has time to rock out with his band, 1974. Forgette is a dedicated member of the rock band 1974 along with his old friends, Tim Moore, Gary Dionne, Adam Clymer and Parker Hu.

The band, 1974, was created and has been rehearsing their music since 2007. The band has three full-length albums that tell a long connected story about cloning in a technology-advanced dystopia and the steps it takes to an apocalypse.
“We kicked around musical concepts for a couple of years before we released ‘Lazer Fortress.’ Once that album started getting local recognition, we started performing more,” Forgette said. “The music community has been kind to us; we’ve won a bunch of awards that we didn’t think we would, and as a result, we keep trying to raise the bar by writing music that we think is epic.”

The beats of the band’s music comes from the drummer, Tim Moore. “I feel very fortunate to have won with the band this year. It’s important that we get to do what we love and not only be recognized for it but for others to be touched by it as well,” Moore said. Moore has been playing the drums for 14 years and enjoys every minute playing.

In April, the band has been recognized by the Connecticut Music Awards and won the award. The band was in pure shock due to the fact that the band hasn’t been as active in past years.

“We’ve been fortunate enough to win CT music awards in the past, and it is a very humbling feeling. We work furiously on writing what we think is the best music that we can write,” Forgette said.

“The CTMAs [Connecticut Music Awards] are great. It’s a blast to see friends and catch up with people. It’s also fun to watch other local bands perform. It’s really just like being with family,” Adam Clymer, the band’s guitarist said.
The band has played their songs in numerous locations such as Toquet Hall, Webster Theatre and the Glastonbury Apple Harvest Festival.

1974 is recording a new album that will be released on Sept. 23, 2016 and rehearsing for future performances. “It’s nice that our fans and fellow musicians recognize the time, effort, and passion we put into our music,” Forgette said.