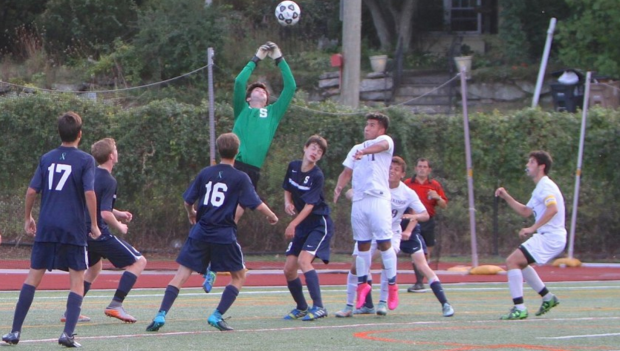 On the pitch there are 11 possible positions. For the most part, there are usually a couple defenders, midfielders and forwards during a match. But one position that has no flexibility is goalkeeper.

When Brenden Price ’16 started kicking around a soccer ball at the age of five, there weren’t any problems with playing time. Even in middle school, Price was still getting a plethora of playing time as a forward but primarily a keeper.

But as his career continued, his position set him up for future conflicts.

Since there is only one keeper on the pitch, it inevitably leads to much more competition. Price’s time in goal began to slip as Noah Schwaeber ’16 developed during their freshman year.

But luckily for Price, he caught a break. “Noah and I were the goalies on the freshman team. But then he moved up to varsity so I was the consistent starter for half the season,” Price said.

Similar to his freshman year, Price was working hand in hand with Schwaeber at the varsity level, but he was his backup for the second year running. However he was able to start the last five games of the season due to an injury.

In hindsight, Price would have loved to start each and every one of these games, but he was content with the time he was getting given the circumstances.

“One day I was put in as the starter… I played the last six games of the season. Even the FCIAC and state game,” Price said.

Price went on to explain how goalie coach Tom Henske helped salvage his season. Henske was able to work Price into the lineup when it mattered most.

Varsity soccer teammate Daniel Brill ’16  saw the valuable credentials and dedication Price offered as he grew up a teammate with him, even before high school.

“I had Price throughout my entire high school career and even before that in travel soccer. The competition for the goalie spot was always fierce but each goalie had their unique skill. For Price, he definitely had the farthest kick and was always on the bottom which made him fight harder for the starting spot,” Brill said.

Price’s kick may have helped him reach his overarching goal, but it was his perseverance that guided him away from the bench and into a playoff run.

“Never give up. I always put in 110 percent and eventually I was able to reach my goal,” Price said.