A country far away boasts a culture close to home 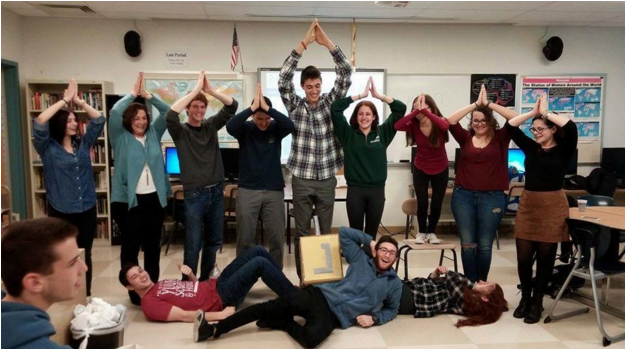 At the club’s annual Hanukkah celebration, students along with club advisor Fran Sinay are challenged to create a human menorah. In the middle stands Kyle Ratner ’16. “We couldn't have found a better Shamash than him,” Kessler said. Photo contributed by Gaya Kessler.

Israel may be located 5,638 miles across the globe, but the rich culture of this tiny country echoes within room 2034’s walls.

The biweekly Israeli Culture Club (ICC), home to Israeli-style barbecues, competitive dreidel competitions and advised by academic support teacher Fran Sinay, has spiked in popularity over the past few years.

“While we used to be lucky to have six people a meeting, now we average around 20,” Jacob Offir ’16, co-president of the club with Jack Sila ’16, said enthusiastically.

Offir originally joined the club his freshman year because of the free pizza, but through managing events, advertising and remaining an active member, the club has provided him unique insight into the Israeli culture.

From the annual Hanukkah party, which is “always a big hit” according to Offir, to learning Hebrew slang, the club’s schedule is chock-full of engaging activities. In fact, this past week, club members tested their reflexes at Krav Maga, an Israeli self defense discipline similar to martial arts, taught by an Israeli Krav Maga specialist.

“It was definitely a fun and memorable experience to learn Krav Maga from a guy who formerly taught Krav Maga to Israeli police forces,” Sila said.

In addition to Staples students, four of ICC’s members come directly from Israel’s homeland: the emissaries.

The Israeli Young Emissary Program is a gap year program for recently graduated high school students before serving required time in the Israeli Defense Forces. The program aims to build stronger ties between Israel and various communities while familiarizing the community with Israeli culture.

“Out of all the things I do as an emissary here in Westport, Israeli Culture Club is by far my favorite,” Gaya Kessler, one of the emissaries currently living with club member Abigail Genser ’18, said. “People see it as if I’m only here to educate about Israel, but they don’t realize how much we learn from the club ourselves- about the American culture, people and lifestyle,” she added.

Students are equally grateful for the opportunity to learn firsthand about a country halfway across the world, gaining a more personal understanding of the culture. According to Offir, students have even stopped by club meetings just to spend time with the emissaries.

“[The emissaries] take the time to teach us Hebrew words and immerse us in a culture that would have been unbeknownst to us in our area,” club member Clara Harr ’16 said.

Although the majority of members are Jewish, both presidents want to clear the misconception that ICC is religiously affiliated or only open to observers of the Jewish faith. “I mean look at the German or French culture clubs. We are like that, but for Israel,” Offir said.

For the rest of the year, Sila and Offir already have an exciting agenda planned. They hope to bring in Israeli soldiers in the spring and host a Gaga tournament against other culture clubs. Both presidents reiterated that the club has much room to grow and hope that its popularity will continue on a positive trajectory.

For now, club members will keep learning and immersing themselves in the Israeli ruach, Hebrew for spirit.

“What we bring to the people who come is more than a culture – it’s a bigger, brighter, more personal look on Israel, from the eyes of kids just like them,” Kessler said. “It’s truly rewarding to know that this club can actually inspire people and connect them to a country in a different part of the world.”