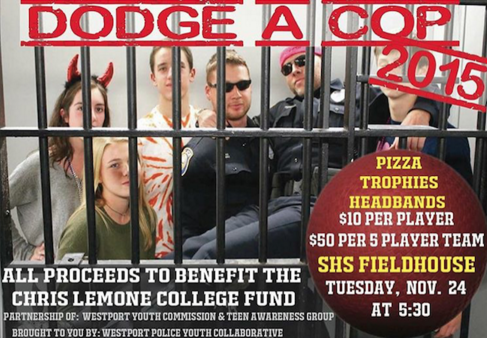 Staples’ annual Dodge a Cop Tournament has been a tradition for students and police officers  from the Fairfield County area since 2011. On Nov. 24, 2015, the fifth annual tournament, students gathered in the Staples field house with more than just winning on their minds, but the memory of friend and student counselor, Chris Lemone, who had recently passed.

Lemone was the the youth outreach counselor at Staples and advisor for the well-known awareness group, TAG, for 17 years. His relationships with students and ability to help them stood out the most. Lemone’s sudden and unexpected death affected not only TAG members but faculty and people all over Westport and Bethel, where Lemone and his family lived.

“To TAG kids, Chris was literally our father. He meant the world to us, and we knew we wanted to to do something to help his family,” Gracyn Levenson ’16, TAG president, shared.

In honor of Lemone, his family started a fundraiser to raise money for his children’s college tuition. Many Staples families and others who were close to Lemone have already made personal donations.

“The money being raised this year at the Dodge a Cop Tournament is going to a fund for Chris Lemone’s children’s college funds, which I think is such a great idea,” TAG member Lauren Chasnow ’17 said.

This year, the Dodge a Cop Tournament, which is usually run by the Westport Youth Commission, joined up with TAG in order to raise money for Lemone’s children’s college funds. With each team consisting of five members, the importance of this cause raised the prices from five to 10 dollars per player. All proceeds from this event, including concessions, went to the fundraiser for Lemone’s children.

“We had all proceeds, which are amounting to around $2,000 go to the Chris Lemone college fund for his kids,” Levenson ’16 said. “Donating this money to them was the least we could do, and Mrs. Lemone was beyond grateful.”