Hefnaway runs off the beaten track 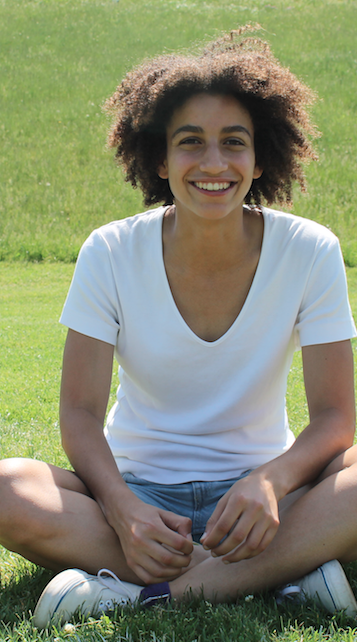 With her loud voice and contagious smile, Erica Hefnawy ’15 can be spotted from a mile away. And that’s where you’ll find her. A three-season captain of the varsity track and field team and cross country team, Hefnaway speeds around the track with a 5:13 mile. But there is much more to her than her vibrant Nike sneakers and her all-star times.

A self-described quirky person, Hefnaway claimed, “When I’m scrolling through Buzzfeed and the article comes across named ‘20 Signs You’re The Weird Friend,’ I can totally relate to it.”

Angie Parmar ’16 ran alongside Hefnaway since the fall of 2013 on the cross country team and every running season that followed. Not only are they running mates, they’re also each other’s partners in crime. One memory that stands out to Parmar takes place in a random locale– Home Goods.

“One day we were dying to use a fart-noise machine, and once we finally got one, [we] ran around Home Goods tooting it, confusing everyone around us,” Parmar said while laughing. “The best part of it all was seeing Erica because she’s the type of person who finds even the littlest things hysterical.”

Although Hefnaway enjoys all the little things about Staples, she is excited for the next chapter of her life.

Hefnaway’s upcoming big adventure is that she’s running off to Boston College to join both their track and cross country team and study international relations, which will hopefully lead her to a career in the CIA.

Hefnaway has the constant need for thrills and excitement, which has been the driving force in her goal to become a secret agent for the CIA.

Though she realizes the risks involved in joining, she still hopes for a career there.

“[The CIA] seems really fun but also dangerous,” Hefnaway said. “Because you know you could low-key die.”

Twenty years down the road Hefnaway hopes to be living in the Middle East as a CIA agent to get back to her Egyptian roots. But as Hefnaway put it, “You’ll never actually know if I became a part of the CIA because I’ll be a secret agent, and they’ve got to be secretive.”

As Hefnaway heads off to the next chapter of her life, she’ll be sad to say goodbye to her team, her friends and her parakeet named Toast, but she’s more than ready to take on her next big adventure, whatever it is.

“I don’t want to live a life of regrets. I want to do everything I can,” Hefnaway said. “I might even skydive when I’m 18 just because I can.”