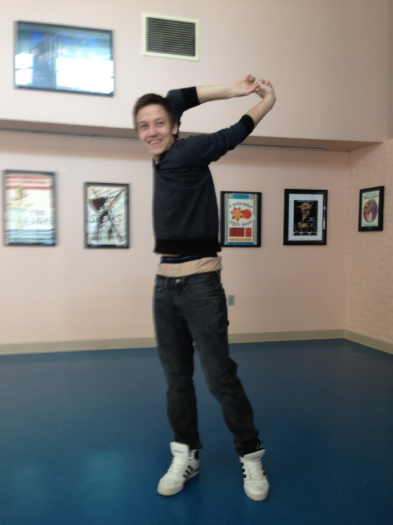 Matthew Bader ’15 demonstrates how he is double jointed by dislocating his left shoulder.

During passing time, one will hear conversations that are riddled with inside jokes and filled with laughter float throughout the hallway. This may make it appear that the Staples community knows everything about each other; however, most people do not know that some students have hidden talents and unusual abilities. One popular, yet unique ability, is being double jointed.

“It is estimated that 10 percent [to] 15 percent of normal children have hypermobile joints or joints that can move beyond the normal range of motion,” according to MedicineNet.com.

Staples students who possess this flexible ability shared their stories of how they first discovered it.

“I was [about six or seven…] when I was first learning how flexible I was, I walked up to my mom one day, said ‘Hey mom watch this!’ and then slid down into a full split. Needless to say she was pretty shocked,” Marta Clanton ’17 said.

Matthew Bader ’15 discovered his hypermobility later in his life.

“I was just stretching one day [in seventh grade] and my left shoulder […] just popped out and I was like ‘wow.’ It didn’t hurt, but it was weird,” Bader shared.

Bader added why he likes being double jointed.

“Its fun to show off, I guess, and freak people out. [For example,] in gym class, my friend Johan and I were stretching and I dislocated my left shoulder and I was pretending like it actually hurt. [My gym teacher] was like ‘oh my god, go to the nurse’ and I was like ‘no, I’m good,’” Bader said, with a laugh.

While Clanton said that she likes being double jointed because it helps her with yoga, she also pointed out the reason why she doesn’t like having this ability.

“When I play water polo, it’s not such an advantage to be double jointed because I am more prone to injuries. Being double jointed also means that my joints are weaker, so I can seriously injure myself if I put too much strain on them,” Clanton explained.

To eliminate the risk of getting hurt, “do exercises, such as yoga, to strengthen the muscles around the joint, learn what normal range of motion is for each joint in order to avoid hyperextension and protect your joints during physical activity by using padding or braces,” Healthline.com suggested.

In addition to Clanton and Bader, Grace Wynne ’17 is also extra flexible. She is able to twist her arms so that it looks like they are on the opposite side of her head, while holding her neck in a headlock.

“I discovered I could do this because my dad and brother were doing it and when I tried it, I could do it too,” Wynne said.

The reason behind this is that being double jointed can be inherited through genetics. In certain genes, there is a protein called collagen. This plays an important role in holding tissues together, MedicineNet.com explains.

In addition to genetics, some other causes of being double jointed include “bone shape or the depth of the joint sockets, […] muscle tone or strength, [or a] poor sense of proprioception (the ability to sense how far you are stretching),” Healthline.com says.

No matter how students got this ability, it is clear that they enjoy having it.

“A pro would be that it’s unique and not many people can do it,” Wynne summed up.