Getting up close and rowdy with Humans of Staples Timi Kolade 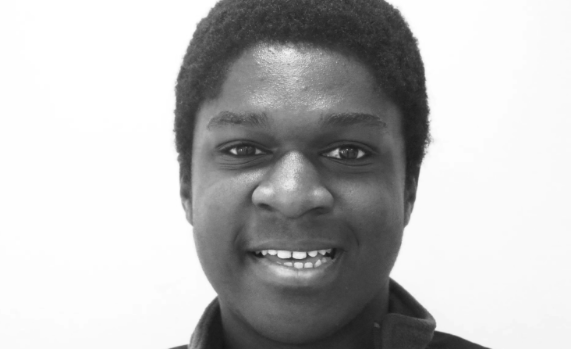 “I do some crazy things,” he said. “I really don’t know why I started to be rowdy, but I can definitely say it can put life [into] any mundane situation and that’s why I like doing rowdy things,” he added.

Kolade’s boisterous personality is expressed through his willingness to do any “Odds Are” challenge. He would never turn down a dare.

One of the most memorable “Odds Are” dares that Kolade was given was to drink from the ketchup dispenser at Shake Shack for 20 seconds. And he did it.

Another of his best dares involved another restaurant as well as a lack of clothing.

“We ran as fast as we could through the restaurant while most people there were silent besides one worker who shouted at us,” Kolade said. “We made sure to have a car ready in the back if it was needed,” he added.

Besides doing risky dares with his friends in his free time, Kolade enjoys playing Spikeball.

Spikeball is a  four-square-and-volleyball-type game and Kolade and his friends have formed a league in which they play competitively.

Andriuk notices Kolade’s strong passion for everything he does, including his participation in Spikeball.

Kolade calls Spikball “one of the best games [he’s] ever played.” He’s that player who’s always clapping and moving around, even if nothing is happening, during the game, he says.

“Whenever I score or my team scores I get very hyped and usually scream or shout very loud,” Kolade said.

Pranks and games aren’t the only interesting aspects of Kolade’s life. For two years, during eighth and ninth grade, he lived and attended an American International school in Lagos, Nigeria because his parents, both Nigerian, wanted him to experience the culture.

Kolade found similarities between himself and all his friends in Nigeria. Together, they played basketball and video games and Kolade still keeps in touch with some of them.

Along with keeping in touch with long-distance friends, humor is also important to Kolade. After rowdy, the second word he uses to describe himself is funny.

“If someone just says a regular sentence, I might laugh,” he said.

Andriuk finds Kolade’s habit of playing his favorite song, Crystal Caverns 1991, at all the right moments another funny example of Kolade’s humor.

“He always plays it in funny moments. Like, if [our friends are] all just hanging out and it gets quiet, he’ll just play this song and get up and start dancing,” Andriuk said.

Once, Kolade blasted the song at QDoba, triggering some of his friends to laugh and others to tell him to turn it off.

“I could be feeling tired or sad but hearing that song makes me energetic and feel like anything is possible,” he said.

While Kolade doesn’t have much planned for his future yet besides having a family and being successful (having a job he likes and being able to afford luxuries for his family), he also doesn’t plan on losing his rowdiness and sense of humor.

“Maybe I’ll get mature or something. I don’t know,” he smirked. “Maybe.”