How much do you know about that water bottle? 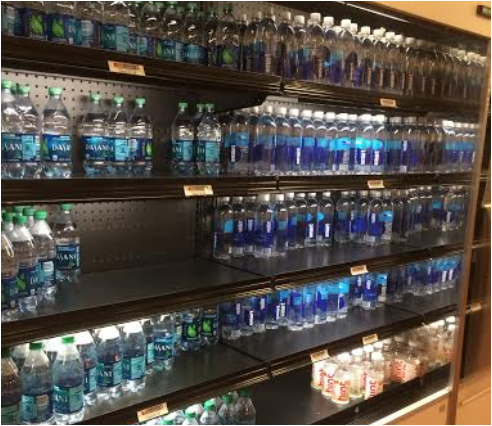 When looking around classrooms almost every desk has a water bottle sitting on it. Recycling bins are filled with empty ones, and half filled water bottles are found covering lunch tables.

While water may never be a drink craze like pumpkin spice lattes or almond milk, it will always have high demand.

There is usually not much thought given to water bottles. They’re bought in the cafeteria, may be refilled once or twice and then forgotten about until the process is repeated the next day.

But Staples isn’t alone; the world spends over $100 billion on bottled water each year.

According to Nimbus, water carrying devices date back to ancient Rome when animal skins were used to carry around water from aqueducts. But, the first documented case of selling bottled water wasn’t until the 1760’s in Boston when water was bottled and sold by a spa for therapeutic uses.

With awareness of the environment on the rise, it would be expected that plastic water bottles are on the decline, but the global consumption of bottled water actually rises by ten percent each year.

And although many prefer bottled water because they think the quality is higher, a study done by Food and Water Watch revealed that almost 50 percent of bottled water is derived from tap water.

“I buy a water bottle from the cafeteria every day,” Carly Lenihan ’16 said. “I don’t really think more about it.”

Often taken for granted in America, water bottles allow for clean water to be transported around the world.

While many students only talk about water when debating Dasani versus Smart Water in the cafeteria, outside of Staples  the water bottle is praised for its convenience and appreciated around the globe, despite controversy surrounding the environmental impacts.