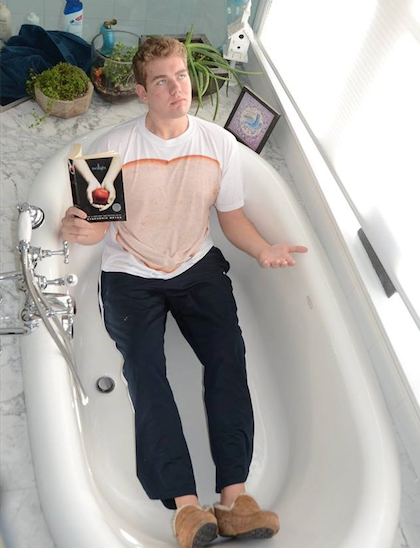 In some senses, Uman is a cult sensation. You’ve probably seen the 6’4” gentle giant lumbering around the halls wearing one-of-a-kind shirts featuring weird monograms, including his shirt of a single piece of bread.

At first encounter, one would assume Uman was eccentric; his loud, boisterous persona leads people to assume that he lives a lavish lifestyle. However, Uman is a man of simple pleasures.

“I would have to say my happiest moment was this summer, sitting at the beach, looking at the ocean, eating pizza from Jordans,” he said.

However, the sight of the ocean is much more appealing to Uman than actually swimming in it. “I’m quite afraid of the ocean,” Uman admitted. “You just don’t know what’s underneath you when you’re swimming.”

When asked what ocean creature he was most afraid of, without hesitation, a straight-faced Uman said, “Kraken.”

“The reason I love Compo Beach so much is that at its deepest portions, it is only a few hundred feet deep and only a baby Kraken could survive, so I’m not too worried,” Uman inquisitively said.

Uman has aspirations for himself before he leaves for college. He aspires to “get swole” in the gym, he said. While most people would use their fit physique to play a sport, Uman has other plans. “If I got that swole I would probably never wear a shirt,” he said. “I think people would respect that.”

Uman admitted the biggest impact he will probably leave on the Staples community is the popularization of referring to everyone as “Dad.”

“Last year, it grew to this whole big ol’ thing – freshmen were saying it, juniors were saying it and, pretty soon, everyone just started calling me Dad,” Uman said.

Uman’s “Dad” legacy is not only prominent of Staples. “Everyone at Amity High School calls each other ‘Mom and Dad,’ and that’s because at J.S.A., I started calling people ‘Dad,’ Uman said proudly. “They spread it to their school, and, since then, it’s spread like wildfire.”

While “Dad” got Uman recognized, it also got him a few enemies, as he now has a “beef” with Staples Players, according to Uman. “The Players think that they started it, and that’s just not true. I started saying it to the bassists I play with who are in Staples’ tech, and they spread it to all of Players. However they don’t know where it rightfully comes from. Honestly, it’s no biggy,” Uman joked.

Eccentric, controversial and larger than life are all ways to describe this one-of-a-kind student. “I’m not a Human of Staples,” he said. “I’m the Uman of Staples.”