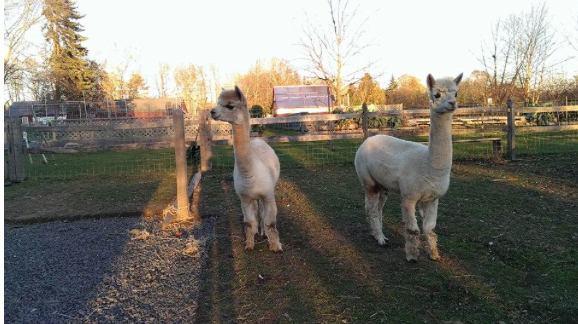 On Nov. 8, the Aitkenhead family welcomed a new furry pair to Wakeman Town Farm.  LeMay and Autumn Joy are mother-daughter alpacas who are practically inseparable.

One of the WTF board members works with an alpaca breeder who recently made the alpacas available.

Alpacas can have a very practical purpose, but even though their fleece is five times warmer than that of a sheep’s, LeMay and Autumn Joy’s wool will be sheared as more of a novelty. Summer farmhand Nick Moro ’15 is very positive about their arrival.

“The idea of having them at the farm is awesome simply because they’re alpacas and nobody really knows that much about them,” Moro said.  “It’s a good way to draw attention to the farm.”

Drawing attention is exactly what the farm staff hopes to do on the Dec. 6 Holiday Tree Lighting when a star atop one of the oldest trees on WTF will be illuminated.  People of all ages are invited to attend and purchase Christmas trees, as well as check out the farm animals.

Ashley Constantino ’17, granddaughter of the original WTF owners and Staples sophomore, visited the alpacas a week after they arrived.

“So far they fit in great,” Constantino said.  “They’ll definitely make a nice addition to the farm.”

The friendly pair spends its days mingling with the other farm animals, but this small pack may turn into a large group.

“One or both might be pregnant, so we’ll be waiting to see what happens with that,” Aitkenhead said.

If the girls do end up giving birth, the Aitkenhead family will need a bigger boat.  “I joke that I’m preparing for Noah’s Ark because we have two goats, two sheep, and now two alpacas,” Aitkenhead laughed.  “But I screwed up–they’re both female!”