The Land of the Sweets comes to Westport 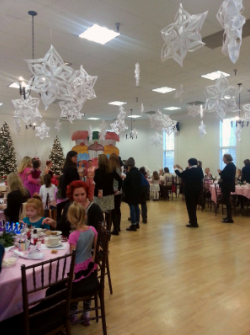 Just fifteen minutes into the Nutcracker tea party at the Westport Woman’s Club, sparkles are already gathering on the floor. Seven tables sit around the room. Each has a bright pink table cloth and a tall, and of course sparkly, nutcracker centerpiece.

Sixty attendees file in one-by-one on the Saturday after Thanksgiving. Some are parents, others grandparents, and others are excited little girls. As each family settles at a table, the young girls climb onto their knees in order to reach the paper crowns and hershey kisses scattered across the table cloth.

“I thought it was the perfect event for Evelyn to get introduced to ‘The Nutcracker’,” Arlene Johnson, Vice President of Finance for the Woman’s club and former AP Biology teacher at Staples High School, said.

Evelyn, Johnson’s granddaughter, dressed up special wearing what she described as a, “dress with ballerina stuff on it.”

The pinnacle of the event was the reading of ‘The Nutcracker’ which was done by Mary Ellen Marpe, wife of First Selectman Jim Marpe. Each time a new character was introduced a costumed ballerina from the Westport Academy of Dance scurried into the room on tip-toe while the little girls crowded around Marpe ohh’d and ahh’d.

Tickets to the event cost 40 dollars a head. All proceeds are going to the Waltersville School’s Performing Arts Program, in Bridgeport.

“People have been doing ballet teas for years, but we have never had anything like that,” Suzan Murphy, the Chair of the Event and the Ways and Means President of the Woman’s club, said. The event was her brainchild.

After the reading, the girls mingled with the dancers from Westport Academy. “They were all so excited to get their pictures taken with us and even asked for autographs,” Harley Kowalsky ’15 said.

“I’m excited to help continue the dream of ‘The Nutcracker’ for these kids,” Lulu Busk ’17, who was one of the Westport Academy dancers who interacted with the girls, said.