Phoebe and phriends strive in phundraising 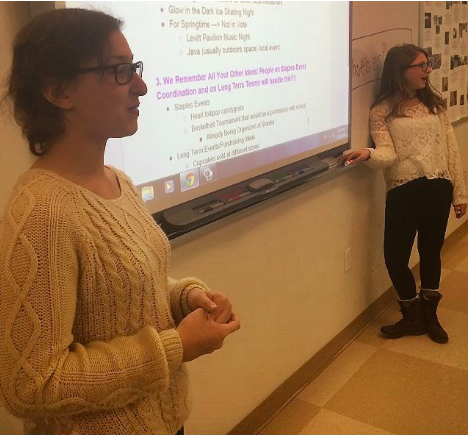 As a strong and radiant cancer survivor, Phoebe Spear ’17 continues to successfully raise money for pediatric cancer in her club she brought to Staples this year called Phoebe’s Phriends.

“After everything happened, my mom and I decided we needed to do something for the cause,” Spear said.

According to the Phoebe’s Phriends webstite , childhood cancer is not only the leading cause of death for children under the age of 15 in the United States, but it also one of the most underfunded areas in all of cancer research.

Less than 5 percent of the Federal Government funding for cancer research goes to Pediatric Cancer, despite the fact that over 2,300 children each year die from the disease.

“Americans spend 20 times the amount on potato chips, than on research for childhood cancer. It’s not just Phoebe, it’s every kid who has had to go through the worst, ” Hallie Spear ’18, the vice president of the club, said.

The organization has already had successful events including the color flash run in Sept. of 2014, in which they raised the phenomenal amount of $60,000.

“There are going to be some fundraisers throughout the year which we are hoping will raise money for what we are supporting,” Casey Donahue ’17, a member of the club, said. The club’s goal is to raise another $10,000  with local events by the end of the year.

In the upcoming months, the club will be hosting an event at Sweet Frog’s in Westport, where the store will donate 20 percent of its profits for one day to pediatric cancer research. Also, they plan on hosting an event at the Longshore iceskating rink this coming winter and at the Levitt Pavillion in the springtime.

“Pediatric cancer is happening to kids who are just like us, and it is our responsibility to make sure it stops,” Hallie Spear ’18 said.