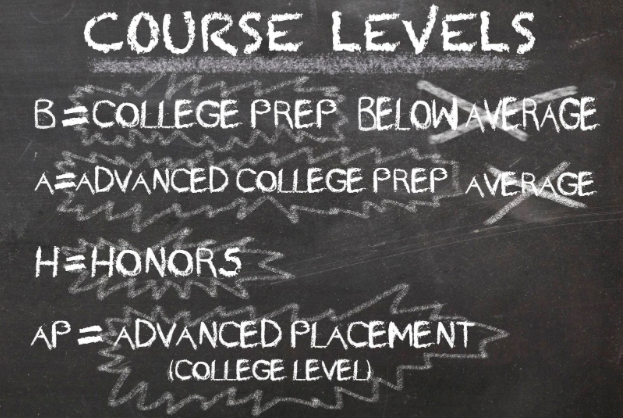 Every student, every day, walks past the same pink flier hanging dutifully outside guidance. As conversation floods the hallway with students chatting about tests and grades, many may not notice this sign, but it hangs there to remind them of what they may not understand.

In bold, black text it reads, “B = College Prep (NOT Below Average).”

Guidance counselor Victoria Capozzi put these signs up last year as her “short, quick, easy way” to stop the preconceived misconceptions of what a B level class is.

This misconception may go hand-in-hand with a stigma associated with not taking high level classes. Staples has four main levels of classes, B, A, Honors, and AP. The purpose of these levels can be lost as students fixate their focus solely on the leveling.

“Everything in Staples is very much based on level,” Jenna Patterson ’16 said. “It’s this culture we have built.”

Patterson points out that this mindset is apparent everywhere in the school. Whether walking in the hallway or studying in the library, “You can hear people asking, ‘What level of this class do you take? What level of that class?’” she said.

This fixation is especially prevalent when schedules are released and class assignments become a dominant conversation starter.

“When everyone’s talking about new schedules, they say, ‘AP this and AP that,’” Alderucci said. He would respond to them halfheartedly, saying, “Well I’m in B.”

He says this obsession over classes can sometimes make students in B classes “feel like they’re not as smart or as good in school,” according to Alderucci.

Throughout her career, Capozzi has seen students struggle with this stigma.

She recalled one time in particular when a student came to consult with Capozzi about her schedule, saying unhappily that she was “only taking two honors.”

“I stopped her dead in her tracks,” Capozzi said. “There’s this whole concept of everyone else is doing something better.”

This culture of constant comparisons and academic drivenness may unjustly impact the level of class students pick.

Each student has a level that fits them best, and while B certainly doesn’t stand for “Below Average,” there are a few key differences that can help accommodate the student.

Phil Fosie ’15, who has taken both A and B level classes, said the main differences are that the B level works at a slower rate and has a lighter workload.

Another major difference is how the classes are weighted. If a student takes an A level class and receives a C, they have a 2.00 GPA. However, if they dropped down to a B class and improve to a B+, their GPA would raise a full point to a 3.00.

For some students taking a B level class, it can make the difference between struggling and success.

Emily Duranko ’16 experienced this firsthand. In her freshman year she enrolled in Algebra 1A, but found it to be too challenging, so she decided to take Algebra 2B.

Originally she was “self conscious” about taking a B class, but now, “I couldn’t be happier with my decision,” Duranko said.

Throughout the incessant chatter about class levels and grades, some students know when to take a step back and realize that the level of class you are taking is not important.