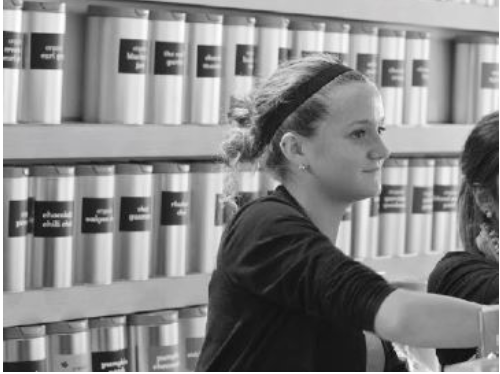 Working hard Anna Bene ’16 sells tea to a customer at David’s Tea. She stands in front of a variety of tea flavors that the store offers, including Chocolate Macaron and Cotton Candy.

According to the U.S. Census of 2012, just over 29 percent of all high school students ages 16 and above are employed in some fashion year-round. Following suit, Staples High School possesses quite a few students of its own who have joined the workforce.

To many of these young employees, a job is simply a way to supply a typical teenager’s desire for pocket-money, but for others, it is an opportunity to learn new and interesting topics.

For Anna Bene ’15, a job at David’s Tea Shop in Westport sparked a passion for the tea industry. In just two short months, Bene has learned how to make tea, sell loose leaf tea and work the cash register. When asked if she had gained any random knowledge, Bene had this to say: “All rooibos tea comes from South Africa, because that is the only place rooibos bushes are capable of growing.”

Others around Staples have found a job that fits a previously held interest. Claire Grosgogeat ’16 recently began working at the clothing store Oddz in downtown Westport, doing everything from working the register to making actual sales.

For Grosgogeat, the fashion industry is more of a hobby, and less of a potential occupation. “I enjoy fashion, but I don’t plan on following it as a career path,” she said.

While most 16 to 18-year old workers find jobs at the bottom of their field, some students have managed to work their way up a bit higher in the job hierarchy. One example is Ian Goodman ’15, who currently works at the restaurant 323, serving as the head busboy, head host and head runner for the entire restaurant.

As the head of these three positions, Goodman is charged with the task of creating schedules for each of the workers in those positions.

When asked why Goodman chose to pursue work in the restaurant business, he had a very practical response. “I do need money, and if I wanted to get a job in the direction of a possible career, it would be through an internship. I don’t have time for both.”

While a typical, low-wage job may seem quite simple, it is important to remember that these students are not spared from thrilling experiences. Bene explained, “One day a woman came in, spent 20 minutes in the bathroom and left. It turned out that she had stolen over $500 worth of merchandise from different stores and dumped all the tags in the trash.” Luckily, the police were able to track down the thief.

A consistent question among those who are considering work is how it is possible to work a 20-hour-per-week job and still have enough time to keep up with academics.

Guidance counselor P.J. Washenko had an opinion on high-schoolers employed outside of the school day. “I think if a student can make a job fit in his or her schedule, it is a great way to learn about responsibility and how to manage money.”

Goodman added onto this point, saying that having some kind of work during one’s high school years is a necessity. “I think everyone should have a job in preparation for the real world,” Goodman said.

Regardless of occupation, Staples students in the workforce are sure to learn valuable life lessons and make a little extra cash on the side.