Attitudes towards rape persist in culture 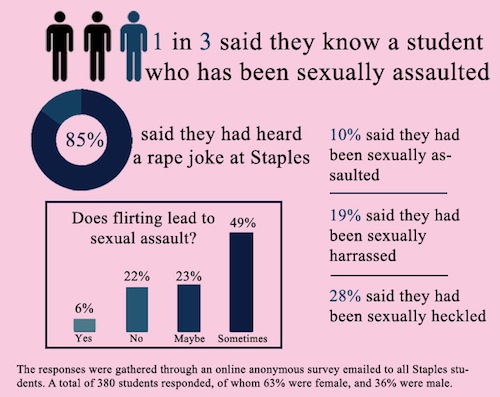 Words that are thrown around casually.

A Staples student who was raped last year by another student agreed to share her thoughts.

“If you can’t emphasize with a victim, or if you have a low sympathy towards others, it’ll create a more cavalier attitude to sexual violence as a whole,” she said.

“Students at Staples have made me feel very uncomfortable regarding sexual assault,” said the anonymous girl. “They say jokes like ‘oh I’m gonna rape you haha,’ or talk about how people want to be raped and how they like it, or just fling the word around like it doesn’t mean anything.”

Rape is one of the many sexually violent terms used on Yik Yak several weeks ago.

In American society, it can be used even more casually. “You will often hear people say if a team loses badly to another that they ‘got raped,’” Social studies teacher Cathy Schager said.

Apps like Yik Yak and Gaggle remove the human element from communication, school psychologist Mary Bernhardt said, as do “TV, movies, internet ads that portray women as sexual objects” and “jokes that do the same.”

These media also contribute to an ever-growing problem — what some call “rape culture:” a culture that normalizes, excuses, and condones rape. The term is well-known in academia, where it has been a focus for decades.

And according to Schager, the history of the United Statescan be traced back centuries, including he rape of slaves by their owners, for instance. The owners’ behavior was largely unquestioned, because slaves in general were considered property.

Today the topic of rape appears throughout social media; how it’s dealt with, though, varies.

One example can be found in the popular television show “Game of Thrones.”

“Women are treated like objects,” Juliet Kimble ’15 said. Although Kimble said she loves the show, she also believes “women are often raped, and come across as sexual things rather than people.”

Kimble says she doesn’t always notice when media condones sexual violence, but “when it is brought to my attention, I feel almost embarrassed, because I don’t want someone looking at me or treating me like that – as if I’m a piece of meat.”

“I personally feel that it’s scary that so much media shows such violent sexual encounters,” DeAgro said. “What does that do to girls’ expectations, when and if they finally do want?”

Some wrongly argue that it is a girl’s obligation to avoid rape, and her own fault otherwise.

Even flirtation is sometimes blamed.

“I feel like too many people think if a girl even dresses in a certain way shes ‘asking for it’” Ronan May ’15 said. “And that is a huge flaw in our society.”

In Steubenville, Ohio last year, two males were charged with sexual assault of a female classmate; reactions were mixed.

Elizabeth Jordan ‘15 said the media “made the [rapists] seem like they were victims by saying they were high school football stars and could lose their scholarships; meanwhile they treated the girl like she was the one in the wrong because she was drinking.”

For rape survivors, this treatment by the media, and student attitudes, are difficult.

“I don’t believe students fully understand what happens afterwards to the people who are raped,” said the anonymous girl. “It’s not easy. It’s not something that happens and the next day we’re over it. Time helps, but doesn’t patch up that pain from within.”