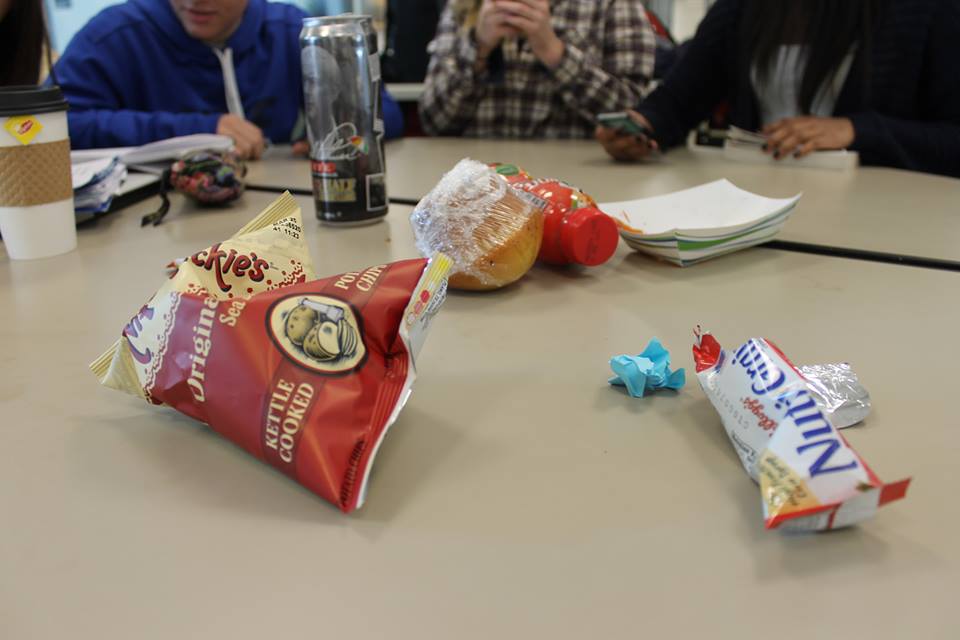 At one of the scattered empty tables, a cluster of muffin wrappers wallows in its own crumby waste. Piles of empty Lays potato chip bags and spaghetti-stained paper plates tower over the students who have carelessly forgotten, or perhaps chosen to ignore.

The 20 trash and recycling bins sprinkled throughout the cafeteria are barely filled, the few unfortunate paper plates that didn’t quite make it at their feet. It’s a sight that makes janitors weep and students cringe at the thought of having to sit at one of these tables. The piles of trash almost serve as an obelisk to entitlement and privilege.

“It’s gross,” says Jackson Ward ’16. “It’s honestly pathetic that kids are just leaving their food for someone else to clean up instead of them throwing it out themselves.”

Teachers on lunch duty face the brunt of this carelessness, constantly forced to clean up as students trickle out from the third lunch wave. They look over the cafeteria as a soldier looks over the remains of a battlefield.

“They should have to clean up after themselves,” says teacher Maura Delaney, who was on duty in the cafeteria. “It’s disrespectful and careless to assume someone’s going to clean up after you,” she said as she got up from her seat and disposed of her paper salad container.

The Staples students’ apathy even made an impression on the exchange students from Singapore, as they described the contrast to their home country. One said, “It makes the cafeteria dirty and unsanitary.” He added,” “In Singapore, the cafeteria is probably cleaner because people make more of an effort to throw their food out.”

Many students said they acknowledge that leaving trash behind in the cafeteria is wrong, yet still the problem persists. One group of freshman boys sitting by the vending machine held back nothing besides their names.

“I just don’t really care that much,” said the loudest of the group, with his eyes ever fixed upon his MacBook screen.

When asked if they would clean up the assorted Cheez-it bags and half-drunken milk cartons that were already at their table, the students shrugged in unison.