The festival of hype: In Judaism, Hanukkah is actually not that important 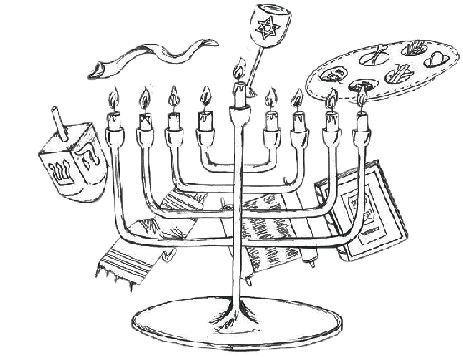 On Nov. 27, presents will be unwrapped, candles will be lit and songs will be sung.

This is no early Christmas. This is Hanukkah, the Festival of Lights.

Hanukkah is a Jewish holiday that celebrates the Maccabean revolt in the second century B.C.E. Traditionally a holiday not greatly celebrated by the Jewish people, Hanukkah has taken a place equal to Passover in importance and has become a symbol of Jewish identity in the 21st century. Passover is an important biblically-derived Jewish festival that celebrates the liberation of the Jews in Ancient Egypt nearly 3,500 years ago. Widely considered by rabbinical scholars to be one of the most important Jewish holidays, the story of how Moses liberated the Jews from slavery in Egypt is one that has been passed down for generations.

Hanukkah, on the other hand, is a relatively new holiday that is mentioned nowhere in the Torah.  Several Jewish Staples students are not necessarily happy about that.

“People confuse themselves and think of Hanukkah as ‘the Jewish Christmas’… people have even started buying and decorating ‘Hanukkah bushes’ as a Jewish alternative to Christmas trees and coming up with Santa-like characters such as ‘Hanukkah Harry,’” Izzy Baildon ’17 said.

“It’s a holiday made for the commercialization era,” he said.

Remy Bonett ’14 was blunter in her assessment of Hanukkah.

“Jews feel left out during Christmastime, and, since basically all of our holidays are depressing, we use [Hanukkah] as an excuse to give presents to family members so we look cool to the Christians,” she said.

However, Moritz went on to say that, while it is a commercialized holiday that may not have any true religious value, it is still a fun holiday to celebrate.

“It’s nice to match up with Christmas and have our own holiday. Plus, free gifts,” he said.

Bonett agreed, opining that Hanukkah is the one somewhat exciting holiday Jews have.

“It’s just the most fun. You don’t have to eat flat cardboard or talk about blood and frogs,” she said.

Though it may be an overhyped and over-celebrated holiday, there is no doubt that Hanukkah is a holiday loved by many.

“It’s less of a religious holiday and more of a happy time that you get to spend with friends and family. We have other holidays that are very religious and serious, so this is one where we can just have fun,” Sydney Newman ’15 said.