Dogs allowed back at Compo Beach 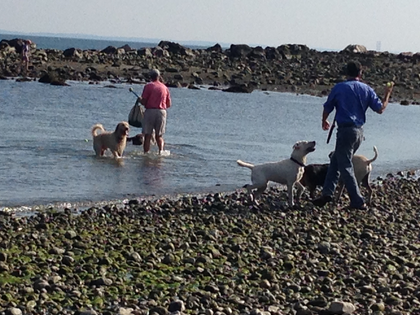 When most people hear of the month October, pumpkins, ghosts and scary costumes come to mind, but for dog owners they immediately think of freedom for their dogs. As of Tuesday, October 1st, dogs have been permitted back at Compo beach.

Nick Greene ’16, an owner of a border collie, said that he is looking forward to taking his dog to the beach because there is “a lot of space” for her to be free.

With all of this space, the dogs are able to take part in many activities that they can only do at the beach.

According to Jodi Ullmann, Izzy Ullmann’s ’17 mom, their black lab loves to go swimming in the ocean, play fetch and socialize with the other dogs there.

This provides the dogs with a unique opportunity to play and meet other dogs, which is something that they don’t normally get to do.

When Westport dog owners aren’t at Compo beach, some of the places they like to take their dogs include Winslow park and their neighborhoods. The majority of owners agree that Compo beach is by far the best.

Westporters aren’t the only dog owners that share the excitement about Compo, even people from other towns love bring their dogs to this beach.

Susan Daly, the owner of two dogs from Weston, exclaimed that their her oldest dog, Sable, has been coming to Compo beach for 14 years. She added, with a sincere look, that when Sable passes away she plans to spread the dog’s ashes in Compo’s ocean because it is her dog’s favorite place.

Along with long term Compo computers like Daly, there have been many new additions this year to the Compo beach dog community. Lynn Roesser, a dog owner that came to Compo for the first time from Wilton, expressed that she had already fallen in love with the beach because it has a “fun atmosphere” that lets her “dog be a dog.”