Much Ado About Shakespeare 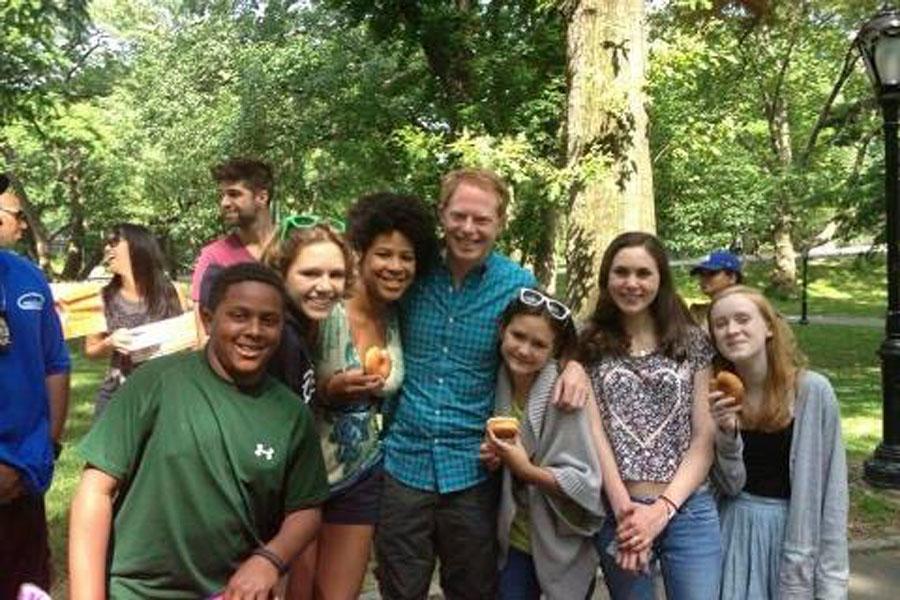 Club members pose with an actor at a Shakespeare in the Parks event this past June.

For many students in the context of their English class, saying “Shakespeare” is equivalent to saying “torture.”

Brian Tippy, who teaches Shakespeare, understands why the historic writer frequently has a negative reputation among modern readers. “I think the four hundred years between us and Shakespeare can sometimes get in the way for students,” Tippy said. “The unfamiliar language and style can make the plays feel artificial and confusing.”

However, despite the complex nature of Shakespeare’s work, for some determined students, there is more excitement than anxiety about the most famous playwright.

These students are part of the Shakespeare Club, a group that was started last year by Killian Jampierre ’15. When asked why she created the club, Jampierre had a simple answer, “I really just love Shakespeare.”

According to member Amelia Tavarnesi ‘15, a typical meeting consists mostly of discussing Shakespeare and coming up with ideas for various events that celebrate his life and works. One already completed activity is a trip to Shakespeare in the Park in New York City this June. Members hope to make this an annual trip.

The next major event on the horizon is the club’s planned performance of Much Ado About Nothing, which will likely happen at Toquet Hall in March. Shelby Cataldo ’15, director of the play, hopes to base it on the original play as much as possible. “It’s going to be a very simple production,” said Cataldo. “But we hope [that it] will raise revenue and awareness for the club and spread our love of Shakespeare throughout Westport.”

Another activity that the club plans to have is a trip to England in April. The club would explore Stratford-upon-Avon, Shakespeare’s birthplace; and certain neighborhoods of London, where he spent much of his life.

Various club members stress the importance of having a love rather than dislike of Shakespeare, as his literature has had a massive influence upon present day culture.

“Movies like ‘West Side Story’ are based on his work,” said Jampierre. “We’re always around his work and many people don’t realize his impact.”

Tippy agrees on the value of understanding Shakespeare. “[He] helped invent our sense of what a human being is [and] the origins of our morality,” he said. “It asks deep questions about love, honor, anger, jealousy and even stupidity, and it takes you along for the ride if you let it.”

The Shakespeare Club will be welcoming new members during Club Rush. Meetings are held every Monday in room 2002. To help support the club’s upcoming missions, indulge in something from one of their monthly bake sales.