Staples: School of the Free 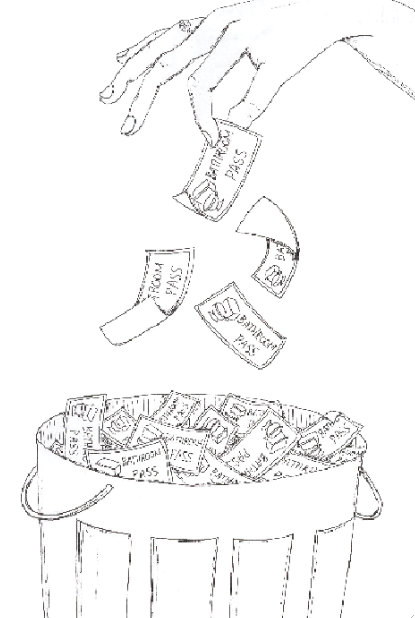 “Where are you going?”

“You need the lavatory pass.”

“OK. Can I have the lavatory pass?”

Though this brings a good laugh in “Mean Girls when protagonist Cady Heron adjusts to life in a public school, it’s something one would never hear at Staples.

The freedom at Staples is so unique is part of what makes it such a unique school. Visitors have even compared the school to a small college. As in the above Mean Girls dialogue, at many schools one does need a bathroom pass to leave class, and attendance is kept much more strict. Staples’ students get the privilege of using laptops and phones during school, and instead of a study hall, there are free periods.

“I love my new freedom in high school,” said Alex Suppan ’16, “I am not constantly being hounded by teachers!”

Students from neighboring schools were surprised Staples offered so much. Jacob Robbins ’15 at Trumbull High School said, “I wish we could just go to the bathroom and not waste our time having to sign out.” Robbins said that he really liked the slogan “Respect or get Wrecked,” because he believes the “respect” we have at Staples is part of what makes it such a desirable school.

Principal John Dodig acknowledged the unusual amount of independence students have. Dodig said, “They [people] are just not used to seeing students freely walking the campus, sitting on window seats, or in small groups on the floor working together on their laptops, or just talking to one another.”

One of the biggest freedoms Staples’ stu

dents have is the privilege of a free period as opposed to a mandatory study hall. Dodig said, “Students at Staples should know that there can’t be more than a handful of schools in America that do not have study halls.”

Fairfield Warde is part of the majority that uses study hall instead of free periods. Danielle Altchiler ’15, a student there, wishfully said, “Instead of having to awkwardly sit [in study hall], wondering if your music is loud enough for people to hear, you could be sitting in the common room with all of your friends.”

Altchiler believes that it’s a huge benefit for students at Staples, “There isn’t gonna be a “study hall” in real life. There isn’t going to be a specific place to go when you aren’t sure what else to do.”

Having this freedom at Staples gives some students the opportunity to catch up on everything ranging from homework to a missed meal. Sylvie Lexow’ 14 uses her free period to refresh herself before her next class. Lexow said, “When I had a free last year I had enough time to do all my work at home, so during my free I would take naps in the cove (aka the theatre area).”

Many students agree that having periods of time where we get to make our own decisions is part of why Staples’ students are so prepared for college and “the real world.”

One might notice that walking down the hallway, students’ faces are brightened by gleaming screens from the various smartphones that are bringing them the latest gossip, news, or homework assignments. And the technology doesn’t stop once in the classroom either; many students have their laptops out during class to do various activities. Staples’ has its own public wifi network that allows for a student to be covertly checking their Facebook or playing Tetris while taking notes in class.

Students at Staples may take this for granted but at Bridgeport Central High School where, according to their website, in order to use the wifi students have to request access with an agreement form signed by a parent or guardian. At Trumbull High School,  stated in the student handbook, personal electronic devices are prohibited on campus.

Hamilton Kovtun ’15 embraces Staples’ freedom with electronics. Kovtun said, “In almost all of my classes, we incorporate Google Drive and smart boards on a daily basis. I believe this gives students a leg up when competing in the world because as we all know technology never stops progressing, so the way we learn shouldn’t either.”

The trust placed in students at Staples’ is highly valued and it’s part of what makes Staples so unique. “If I did not have that trust,” said Dodig, “we could not operate a school of this size with as few rules as we have.”

Isabel Perry ’15 said, “I had a teacher [at Staples] who said that he didn’t care about texting or being late to class.  It’s the student’s problem if they don’t want to listen to the material, and they fail the course.”

It’s obvious that whatever Staples’ is doing is working. Having some of the highest test scores in the state and a diverse selection of classes and clubs, student’s can definitely  feel the benefits.

Meredith Bemus ’14 pointed out that having this much freedom has helped her personal organization skills because she has learned to balance sports, school, and extracurriculars. Bemus also said “The freedom at Staples High School has allowed me to become very independent and it has given me the confidence to be myself.”

For Principal John Dodig,  “As long as the adults in the building treat students with respect and receive it in return, freedom is not an issue with me.”