Do You Have the Edge? 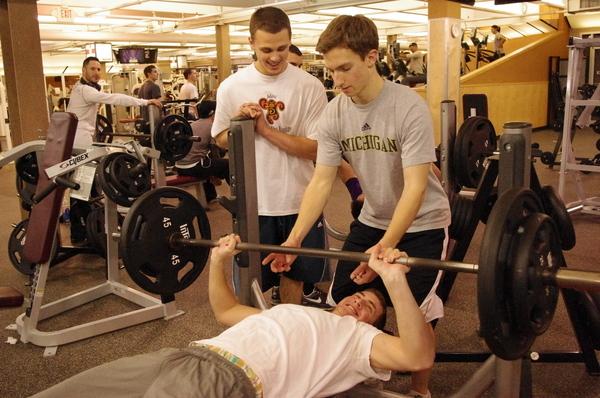 After the 2:15 bell, most Staples students take part in something aside from their school work.

For some, its a sport or a club. But for a many others, its going to the gym- a specific gym for that matter- The Fitness Edge in Norwalk, is more commonly known simply as “the Edge.”

The Fitness Edge, as of this year, has become a destination spot for many students from all grades- for a variety of reasons.

Jordan Goldstein ’11 has been a member of the Edge for over a year, but has recently gone to the Edge more than he used to.

Originally forced by his parents, Goldstein now attends the Edge out of pride and joy for working out.

“Over the past two months I have become more motivated [to work out],” Goldstein said. “It’s senior year, and I want to look awesome.”

Although aesthetic appeal may be the motivation for some, Spencer Adler ’11, a member of two weeks, joined the Edge to keep in shape during the winter time.

“I decided to join the Edge because I wanted to become more fit and increase my strength levels during the winter with a couple of friends.”

Adler’s attendance at the Edge is a product of his friendship with Goldstein.

“He introduced the idea of joining to me, and now [Goldstein] and I workout together.”

Working in pairs or small groups is what has brought many new members to the gym. Katie Platt ’13, who has been a member since September, said that working out with her friends not only helps her keep in shape during the volleyball offseason, but also the added competition makes for a more fun workout.

Goldstein feels similarly–working out with friends helps him learn about new exercises.

“I like working out with friends because it makes for a better workout,” Goldstein said, “my friends often teach me new lifting techniques so I can really maximize my workout.”

The Edge has also seen increased popularity because of its proximity to Westport and its cleanliness.

“[The Fitness Edge] is close,” said Katie Platt ’13, “and it has everything you would want from a gym- a friendly staff, a nice facility, and its kept clean.”

Inside the nice facilities are classes that run by the hour daily, which many, including Abbey Fernandez ’14 take advantage of.

“I joined the edge because they have a lot of classes that I like to take, which provide a nice variety to working out by yourself.”

The large amount of Staples students who attend the Edge have allowed the question to be raised: Is the Fitness Edge a social scene for students?

Although there are a large number of students who attend, Adler said, they are still outnumbered by adults and former students from all around Fairfield county.

Even so, as newly joined member Steven Denowitz ’11 explains, “The Edge has pushed kids with cars to join- I see many upperclassmen there.”

Denowitz also added that upperclassmen have joined because of early acceptance into college – and how that may cause boredom after school for slacking seniors.

As a result, as Platt said, at any time after 2:15, “you are almost guaranteed to see at least one to two fellow classmates.”

In response to whether the edge is a social scene or not, there’s one interesting way of putting it.
“The Edge is not a social scene in regards to people go there to hang out and gossip,” Goldstein said, “but rather it is one in the sense that everyone wants to look good and be in shape, so as a result, it has become a ‘social enhancer’.”