Students use caffeine as daily pick-me-up 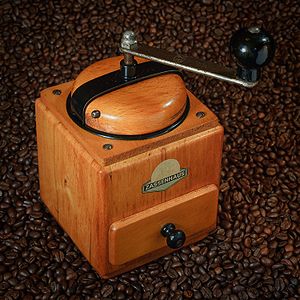 Everyday, students buy a drug that is provided by stores like Starbucks and Dunkin Donuts. Many purchase it over the counter and ingest it throughout their first period classes. Caffeine is a licit psychoactive drug accessible to minors, but because it is available on the coffee shop menu, the harmful effects are quite frequently underestimated.
Like many of her peers, Jamie McGlynn ’12 consumes one large coffee every morning. Without this approximate 300 milligrams of caffeine, McGlynn experiences an acute headache, exceptional fatigue, and irritability.
According to Sleep Medicine Specialist Allison Vail, what McGlynn encounters are legitimate caffeine withdrawal symptoms.
Along with these, extensive caffeine users may experience agitation, disruption in sleep patterns, and lack of concentration after caffeine cessation.
“These withdrawal symptoms can sometimes be so severe as to impair one’s daily functioning. But because caffeine is so commonly used, its substantial effects often go unrecognized,” Vail said.
Carson Einarsen ’12 believes that there is an evident student-dependency on caffeine within Staples. Einarsen and McGlynn concur that this is a result of the significantly large workload that many teachers administer.
“Students may resort to caffeine whether it is to pull a late night studying, or to wake up from one,” Einarsen said.
While this recourse to caffeine may be typical and somewhat expected, it is in fact comparable to the dependence on any other stimulant for temporary relief of depressive symptoms and lethargy.
“Many fail to realize that caffeine is indeed a drug. It elevates your mood, energy, and alertness. Like other stimulants, it can be addictive, it can be abused, and there are dangers just the same,” Vail said.
What attracts most students to caffeine, particularly those who do not get adequate sleep, is its ability to increase energy and alertness.
Another appeal is that it is said to speed up the metabolism. Both of these effects, however, are temporary and precede adverse effects.
“Caffeine wakes you up because it actually stimulates the production of adrenaline, essentially triggering a stress response throughout the body, which entails increased blood sugar among other things. When the response fades, you will probably feel fatigued and hungry,” Vail said.
McGlynn recounts that in her past years of being a more persistent coffee-drinker, she experienced a significant pulse increase and an “intense shaking” in her legs. Evidently, what she was actually encountering was a state of chronic stress.
Eliza Seaver ’12 chooses not to ingest caffeine in any form. She admits that this is primarily because she has an aversion to the taste of coffee and soda, but also acknowledges caffeine’s health implications.
“It may give you a short term boost, but this boost is never sustained. There are different ways to receive the relatively short lasting benefits of caffeine that won’t do harm in the long run,” Seaver said.
As students become aware that caffeine will essentially cause fatigue and anxiety, they find alternate ways to requite for their lack of sleep.
“Now, I try to drink coffee in moderation. When I am in need of an energy boost, I venture for whole grains and vitamin C,” McGlynn said. “Overall, I am gaining more vitality from this than I did from incessant caffeine intake.”
Craig Wheat ’13 has a different strategy of reinvigorating himself after devoting a long hours to studying.
When Wheat’s eyes become heavy and his head is tugged down by gravity, rather than indulging himself with a large cup of coffee, he sets an alarm to sound after approximately 20 minutes.
“Power naps are extremely effective. Getting a quick 20 minutes of sleep is essentially more helpful to reviving energy and concentration than a cup of caffeine is. The boost is equivalent, but the nap will spare you long-term lethargy,” Wheat said.
Vail vouches that Wheat’s method is indeed more wholesome and effectual than resorting to caffeine, but maintains that the sole method to completely perpetuate energy, concentration, and ebullience is to attain a solid eight hours of sleep.
“A minimum amount of sleep is perpetual. Regardless of when you make up for lack of sleep, eventually, it will always win,” Vail said.

What Caffeine Actually Does to Your Brain [Video] (lifehacker.com)
Caffeine and Children: How Bad is It? (healthmad.com)
10 Ways to Start Your Day Without Caffeine (everydayhealth.com)