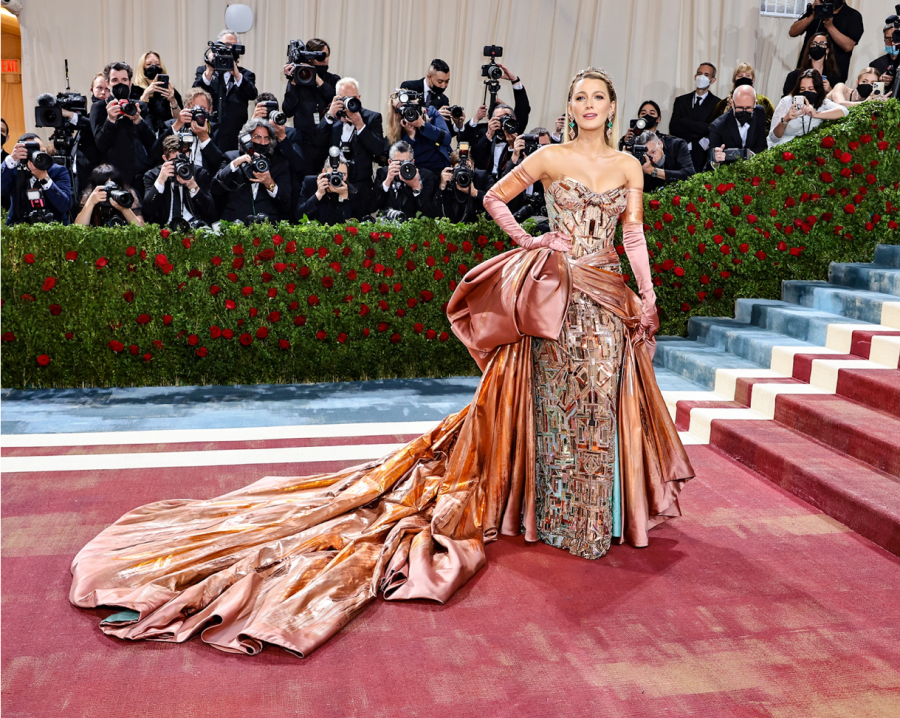 Blake Lively wearing Versace pays an homage to the Statue of Liberty. The rusted red color is supposed to represent the copper that then oxidized into the light blue, green color that was revealed once Lively’s skirt was untied.

“In America: An Anthology of Fashion.” Gilded Glamour. The 2022 theme of the Met Gala was intended to be over the top, extravagant and far from boring. Yet, when the celebrities made their way onto the carpet it was lackluster and unoriginal. Very few celebrities took the theme and time period into consideration. While I was disappointed in the lack of glamour, I can’t say I am surprised. At this point, it seems like no one is listening to the theme anymore.

What is gilded glamour? I asked myself the same question. Celebrities were supposed to pull inspiration from New York’s Gilded Age during the late 19th century, which was defined by grandiosity. This time period marked the cultural and structural shift in New York. Skyscrapers were beginning to fill New York’s skyline, and immigrants were entering the city. This expanded the fashion industry in New York because everything was more industrialized; therefore, quicker, easier and cheaper to produce.

Many new inventions were created during this time period. Famously recognized are Thomas Edison’s lightbulb and Alexander Graham Bell’s telephone. Both of these inventions made things easier in people’s life–more light to illuminate any space, accessible and quick communication from different locations. Simultaneously, there was rapid growth in the mechanical processes of making clothes, which allowed women to experiment with new textures, patterns and outfits. More specifically women were adorned in bows, lace, frills and ruffles. Think the bigger the better.

Women generally wore deeper jewel-toned colors because the lighter colors were restricted for the home due to lack of practicality in the streets of New York, but for some reason, celebrities interpreted this as black. Kendall Jenner, Lizzo, Bella Hadid, Vanessa Hudgens, Phoebe Dynevor, the list goes on.

Now after learning all about the glamorous gilded age, I expected luxurious ball gowns, big skirts, poofy sleeves, lace and frilled trims around the edges of dresses, but for the most part, I saw little slip dresses with some appliques. But, the celebrities who did follow the theme do not go unnoticed.

Of course we have to start with Blake Lively, she never disappoints. I’m partial to her, being that Gossip Girl is my favorite show, but regardless she truly represented the theme. Her over-the-top deep rose gold gown that transitioned to be robin’s egg blue was breathtaking. The large bow of fabric that when untied became her skirt, encapsulated the meaning behind this year’s Met Gala theme.

Honorable mention to Emma Chamberlain, while I didn’t love the plain white skirt on the bottom, her cropped puff-sleeved top perfectly combined the modern clothing trends with the Gilded Age. Her addition of the tiara also added a nice touch of glamour and luxuriousness to an otherwise plain outfit.

Now, by no means is my critique of these celebrities’ Met Gala looks saying that they didn’t look good; they looked beyond great, I just wish that more celebrities followed the theme especially since there was so much they could do with it. Year after year, this seems to be recurring: no one really follows the Met Gala themes anymore.