‘Are You The One?’ is the throwback reality TV show Netflix knew we all needed 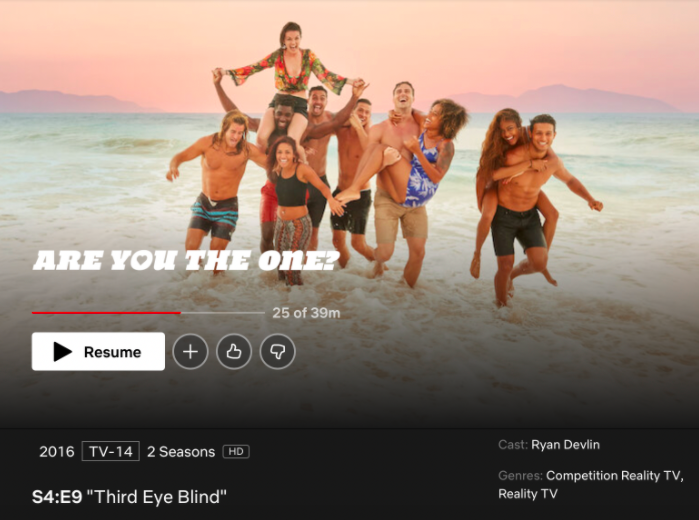 Netflix released “Are You The One?” this holiday season to cure our reality TV cravings. Each season has different casts with different dilemmas.

Like reality shows “The Bachelor” and “Too Hot To Handle,” “Are you the One?” has you glued to your computer screen. The show was reintroduced this December by MTV after it was previously filmed in 2014, and the first two seasons are now available on Netflix. Each season includes a different group of people and a ton of different drama. 10 men and 10 women from across the United States are assessed by a team of psychologists and professional matchmakers. They are then anonymously matched with another member of the cast and put in a house to put the pieces of the puzzle together.

The incentive, aside from love, is $1million. Each week there is a check-in and if the participants fail to find a match, they drop $250,000 from their budget. If all the singles are able to match up, they split the large sum of money awarded by MTV and walk away with a potential husband or wife.

The show has it all. From the screaming drama and ridiculous fights, you could not possibly be bored. As the show progresses, the audience gets to watch the contestants compete in multiple humiliating and gross challenges to score romantic dates with the partner of their choosing. When the selected couples leave for their dates, the other members of the house vote them into what is called the “truth booth,” which reveals if the couple truly is the perfect match. This, of course, leads to the most dramatic and entertaining scenes. Couples that thought they were in love then have to break up and venture into the house: a recipe for disaster.

“Are You The One?” does an amazing job of giving us drama and incorporating math to strategically find out who is matched.  “It’s hot people trying to do math and follow their hearts — at the same time.” Mashable writer Allison Foreman said.

This show kept me entertained and did an excellent job of giving their audience pure reality drama. I hope Netflix continues to bring back throwbacks to cure our reality TV cravings.