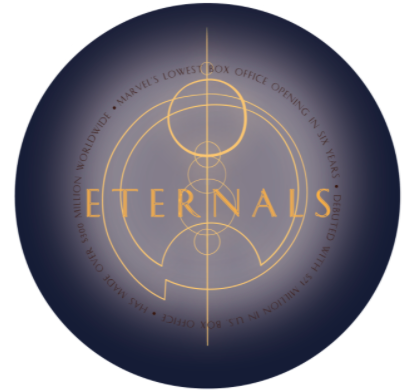 Marvel’s ‘Eternals’ hit theatres Nov. 5, receiving extremely mixed reviews from critics across the industry. While director Chloé Zhao’s storytelling becomes convoluted and unclear as the film unfolds, the characters’ stories reflect the human experience in one of Marvel’s most successful attempts yet to humanize its idolized heroes.

Marvel’s newest group of galactic heroes put on quite the spectacle in this  installment of interdimensional conflict. We witness director Chloé Zhao fighting to reign in the film’s industrial-strength energy to plant seeds of humanism in the plotline. Although Zhao’s efforts are a titanic struggle that are reflected in the convolutions of the storytelling, the film is well punctuated by small moments of heartfelt human connection.

Amid a complex plot, “Eternals” transforms a long-held cultural definition of superheroes that placed them on idyllic pedestals and characterized them as coldly unswerving in their belief system. The lead characters struggle with their emotions and sense of humanity, while finding both solace and pain in the strength of their familial bonds.

Bearing witness to human events throughout history—including the destruction of Tenochtitlán, the rise of Babylon and the dropping of the atomic bombs on Hiroshima and Nagasaki—connected the eternals to feelings of love, guilt, fear, faith, devastation, intimacy and more. They diverged from one another in their viewpoints, fought and disagreed, making them more complex and sophisticated characters.

Strong familial values, a well-developed theme in the Marvel Universe, is cemented in Zhao’s film. Interpersonal relationships between the crowded marquee of characters become indispensable to the group’s chemistry.

The charmingly intense and quick-witted Thena (Angelina Jolie), for example, forms a fierce bond with the generous and caring Gilgamesh (Ma Dong-Seok). Ajak (Salma Hayek), the Prime Eternal and unfailingly loving mother figure to the other nine, encourages their pursuit of passions and interpersonal relationships. Though saddled with a responsibility to look after humankind, the eternals’ freedom to explore themselves as ordinary people with a rainbow of emotions, passions and desires creates steady realism throughout their journey.

While the film effectively developed a new cultural outlook on the role of superheroes, Zhao interrupted any momentum that her likable heroes were building with overly confusing plot development. Frequent flashbacks throughout the film end up serving as lots of confusing side chatter, muddying the present-day plotline of the film.

Further, the grandiosity of the group of heroes clashes with the relatable, human characteristics that Zhao tries to build throughout the film. In particular, the eternals’ starship, the Domo, is a massive marble structure emblazoned with swirling gold designs. While commendable for a simplistic yet palatial addition to their arsenal, the Domo only reinforces the dichotomy between the eternals’ humanism and their otherworldly origins.

“Eternals” builds well on Marvel’s efforts to cultivate traits in superheroes that connect them to their humanity. This humanistic approach resonates more soundly with audiences. It adds dimensions to the real human experience while maintaining the resplendent and entertaining factors of moviemaking. As the movie quiets down, we are left with these new themes—indeed, Zhao’s messaging resounds more strongly than the film’s shortcomings.