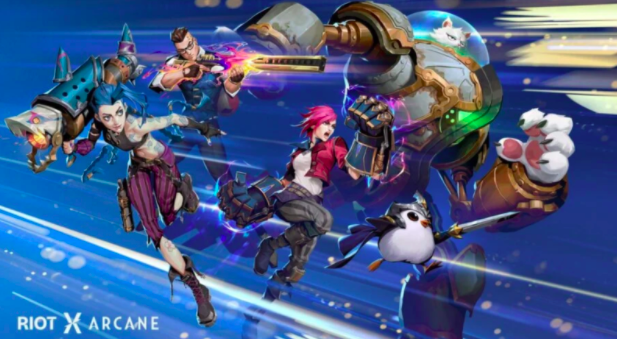 With a perfect blend of steampunk and fantasy, “Arcane” depicts a world run by politics, magic and class divides. Even from the first episode, it was clear that the show takes the cake for Netflix’s animated series. Based loosely on the background plot of popular team-based video game “League of Legends,” “Arcane” can draw interest from viewers searching for a beautifully animated series chock full of evolving characters, a multifaceted plot that focuses on several characters and an action packed adventure.

Within the utopian city of Piltover, which leads the world in technology and magic usage, the Undercity is ravaged by gang violence, drug abuse and the main villain of season one: Silco. The show follows several characters experiencing different lives in Piltover, including disenfranchised and torn apart sisters Violet and Powder, magical scientist and council member, Jayce, and policewoman, Caitlyn. Despite this, Violet, better known as Vi, is considered to be the main character as she fights against the odds to be reunited with her younger sister.

First to be commented on is the animation style. The “Arcane” animation leaders are Christian Linke and Alex Yee who, with the help of the French animation studio Fortiche, presented a punk, sharply edged and neon colored animation style to heighten the viewing experience. However, this grungy style is applied only to the characters from the Undercity – the poor, beaten-down and struggling characters. The advantaged, rich characters from the Uppercity were stylistically graceful and beautiful. These choices highlighted a continuous theme of class divides and disadvantages of the lower class.

As the episodes progressed, the story took an approximately six-year time gap, where the characters grew up. The writers of “Arcane” mastered character progression and wrote each character in a way to highlight missing information from the time gap. Though the audience was left out of a large portion of time, context clues within dialogues and cut scenes were able to aptly fill in the missing details for watchers. Each character was faced by an adversary in some form and each went through tremendous growth, positive and negative.

Heads up: Going forwards, there will be a major spoiler about the end of the first season.

“Arcane,” though it has already landed in my top 10 show list, has one major issue: the cliff hanger. Within the final seconds of the season, a missile is launched at the governing body’s chamber where several of the main characters are debating a peace treaty. The initial shock factor added to the viewing experience and was exciting to see. But soon, my excitement turned to exasperation. Waiting for a second season to come out to find out if some of my favorite characters survived or not leaves the ending falling flat compared to the explosiveness of each episode.

Overall, I would rate this show four and a half out of five stars. “Arcane” is bingeable and exciting with characters to die for and contains a plot to pull on your heartstrings with motives to rile you to revolution. I would definitely recommend this show to fans of science fiction and fantasy and animated shows, but be aware, the ending will leave you begging for more.