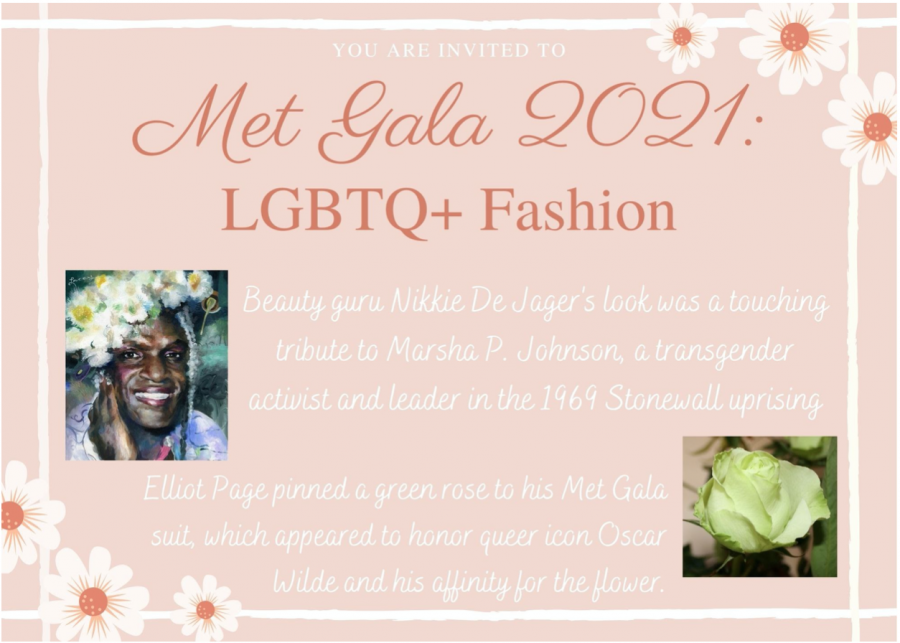 Dan Levy and NikkieTutorials, among other stars, used the 2021 Met Gala’s American theme to showcase the importance and power of LGBTQ+ icons and queer symbolism.

The Met Gala took place in the midst of fashion week, on Monday, Sep. 13, the 2021, as opposed to its usual date on the first Monday in May, due to COVID-19 restrictions. The theme was “In America: A Lexicon of Fashion,” which was meant to represent American independence, as well as the relevance that American designers have had in culture throughout history and today.
Many of the night’s gems revolved around queer and transgender representation and bringing those voices to the forefront of the gala. Not only did LGBTQ+ stars bring beautiful outfits to the table (or in this case, red carpet), but a few of the outfits connected to the theme by highlighting America’s history regarding the community and how LGBTQ+ people have contributed to our culture.
One of my favorite attendees of the ball, Nikkie de Jager, known to her 13.8 million YouTube subscribers as NikkieTutorials, donned a floor length teal gown by Edwin Oudshoorn Couture. De Jager, who came out as transgender in 2020, used this dress along with a “Pay it no mind” sash and flower crown to create a touching tribute to Marsha P. Johnson, a transgender activist and leader in the 1969 Stonewall uprising.
De Jager also laid a bouquet of flowers at the spot where Johnson’s body was found in 1992, honoring the transgender community beyond her homage at the Met. “Marsha P. Johnson paved the way for so many of us, and I hope I made my community proud tonight,” she wrote on Instagram.
De Jager’s Met outfit is especially important considering that she is known as a beauty vlogger, and many people believe that influencers should not be attending the Met Gala. De Jager’s look was a tasteful tribute to a key part of America’s LGBTQ+ history and culture while also proving that she had a rightful place at future Met galas.
Dan Levy connected his Met Gala ensemble to the LGBTQ+ community in a visually different manner than de Jager’s. The first-time Met attendee collaborated with designer Jonathan Anderson to create a custom outfit created by fashion house Loewe, aiming to celebrate queer love and visibility.
The image on Levy’s outfit itself depicts an outline of two men kissing and is decked with an original piece by artist David Wojnarovicz. Anderson and Levy incorporated it into a red carpet worthy to offer a hopeful message to the public with a slight flip on Wojnarovicz’s original piece. Levy’s ensemble was certainly a look that stands out to the viewer, and connected to the theme effectively by incorporating an American artist and prominent themes in our culture.
American soccer star Megan Rapinoe attended the Met Gala in a bright red suit over a blue satin shirt covered in silver stars. Her blue marble clutch had the words “In Gay We Trust” written in red and white bold block letters. Although the look was quite direct and not as showstopping as the others, Rapinoe represented the theme and the LGBTQ+ community of America quite perfectly.
Elliot Page represented queer themes on the red carpet in a more subtle but equally as effective way as other stars. In his first red carpet appearance since coming out as transgender earlier in 2021, Page arrived in a black Balenciaga suit and chunky sneakers, complemented with a green rose. While at first the look seems simple, it’s actually quite the historical nod to the LGBTQ+ community.
According to historians, queer icon Oscar Wilde had a love for green flowers throughout his life, beginning in 1892 during the premiere of a play of his, where he asked an actor and some young fans to wear a green carnation. Whether or not Wilde intended the flower to be an expression of his sexual orientation, the green carnation continued to be used as a symbol of queerness throughout history.
“Wearing a green carnation on your lapel was a secret, subtle hint that you were a man who loved other men,” LGBTQ+ historian Sarah Prager said in their overview of queer-coded plants.
Although the tailoring of Page’s suit could have been more refined, especially for an event this prestigious, Balenciaga is known for its oversized tailoring, and the modern look Page captured on the red carpet is a nod to American fashion in and of itself. Overall, though the look was not extravagant, it nailed the theme in a classy and wonderful way.
Although plenty of other LGBTQ+ artists attend the gala, these four stood out throughout the night as being on theme and representing the community. Considering how important the LGBTQ+ community has been in helping develop the culture of America as a whole, the night’s looks from various invitees showcased how those cultural themes could be translated into fashion in a palatable and elegant way.