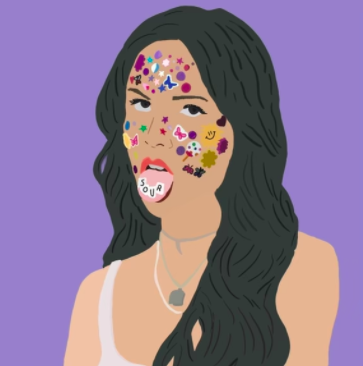 Olivia Rodgrio’s debut album “Sour” was released on May 14. The song styles range from emotional ballads to pop punk and have been met with critical acclaim.

There are hardly any musical albums that can make me simultaneously cry, scream and dance. Yet, in Olivia Rodrigo’s new album, “SOUR,” which was released on May 14, she manages to evoke and convey all of the emotional inconsistencies of being a teenager –– in just 35 minutes.

In “SOUR,” it feels as though Rodrigo is painting a portrait of the emotions of the modern teen, with lyrics that are both poised and accurate. It is almost as if she is mirroring my very own life.

Take the lead-off track of the album, “brutal.” With a punk rock twist that is a marked contrast from the style of her debut single, “drivers license,” she screams into the abyss about the struggle of being a teenager. With a strong bass line, Rodrigo sings about how she’s “so sick of seventeen/Where’s my f*****’ teenage dream?/If someone tells me one more time/Enjoy your youth, I’m gonna cry.” While seemingly dramatic feelings that only come to surface in fits of rage, hearing Rodrigo scream her feelings embodies the overpowering nature of the very mundane frustrations of adolescents.

By putting such an emphasis on the uneventful intensity of high school, Rodrigo is able to capture both the depth and duality of teenage emotion. In “1 step forward, 3 steps back” Rodgrido focuses inward on the conflict that arises when you know a relationship is toxic and would be sensible to leave, but you can’t bring yourself to move on. In retrospect, leaving makes sense, but in high school, breaking up may not even feel plausible.

Having an album like “SOUR” that brings dramatic, yet pronounced teenage emotions to light without making them feel insignificant or senseless is undoubtedly important. Rodrigo captures these experiences without undermining the emotions attached, which is what makes “SOUR” so powerful.

Additionally, the style and lyricism of the songs work in tandem with the production of the album to create a striking debut album. Much of the credit is due to Rodgrio’s producer, Dan Nigro, whose skills shine bright throughout each track. Whether it be the sensational harmonies in “drivers license,” the sampling of Taylor Swift’s “New Years Day” on “1 step forward, 3 steps back,” hidden phrases that are whispered between the lyrics on “brutal” and “deja vu” or the emotional crescendo on “hope ur ok,” the careful consideration of each component of the songs contributes to the beauty and success of the album.

That being said, the style of the album is not always coherent. For instance, “good 4 u” is an ode to 2000s punk pop. It’s energetic and the lyrics are playful. However, the track that follows, “enough for you,” is an emotional ballad about struggling with self identity during and after a relationship. While no album should be completely homogenous and diversity in style can be meaningful, the constant change in energy and intensity makes it challenging to play the entirety of the album to fit a specific mood.

Nonetheless, the extreme variations of each song do also represent the fluctuation of teenage emotions. Anger, joy, excitement, grief, pain and hope are all feelings that come in waves for adolescents and having so many different styles of songs make the album a more accurate representation of youth, even if it may create challenges when listening.

“SOUR” achieves a complexity and depth that all first records should aspire to achieve. For just 18, Rodrigo’s storytelling and range enables her to properly convey the emotional complexity of high school in a way that few can. Rodrigo’s talent and stardom radiate on “SOUR” and for that, I give the album an 8.5 out of 10.